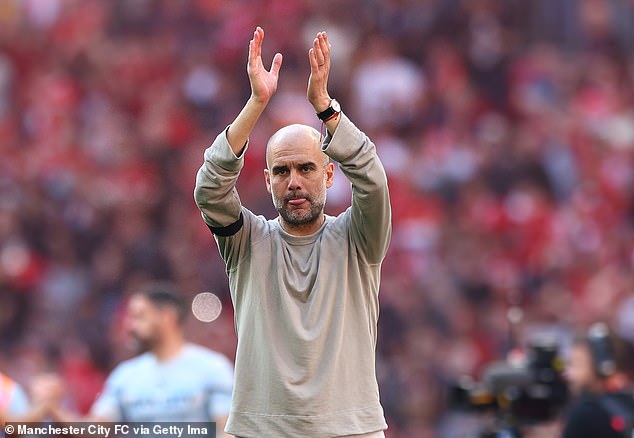 By Dominic King for The Mail on Sunday

Pep Guardiola insisted he had no regrets for the team he selected at Wembley and refused to pin any blame on reserve goalkeeper Zack Steffen.

Guardiola made seven changes to the side that had drawn 0-0 with Atletico Madrid on Wednesday to progress in the Champions League, one of the most notable being resting Ederson for Steffen, who plays most domestic cup competitions.

Steffen was culpable for Liverpool’s second goal, as his poor touch allowed Sadio Mane to charge him down and punish him to maximum effect. The United States international – who also had questions to answer about allowing a volley from Mane to slide past him on the cusp of half-time – was noticeably shattered at the final whistle and was consoled by Ruben Dias on the pitch.

Guardiola said: ‘I have a lot of confidence in my players. We had a lot of fixtures and travels and a lot of important games and that’s why I picked the team.

‘The first goal (from Ibrahima Konate) was a set-piece, where Liverpool are so strong and score many goals, and the second was an accident. Then we conceded a goal in the last minute of the first half, but afterwards we showed incredible pride.

‘We didn’t look tired after we scored because football is about momentum. We had the most clear chances and we scored goals. It is not easy to do that against Liverpool. We fought to the end and showed our pride.’

On Steffen, Guardiola added: ‘It was an accident but we need him to try because that’s how we play our football.

‘I spoke to the team in general but it was an accident, it happens. Edi was close (to making a mistake) in the last game as well. It happens. We need that to create our football. Of course you should review if it happens quite often but we use our keeper to move our opponents into different situations.

‘I would say that the average, the way we create our options, these things can happen. It is an accident. I’m pretty sure Zack didn’t want to do it. Sometimes the strikers miss in front of the keeper, other times the keeper makes a mistake.’