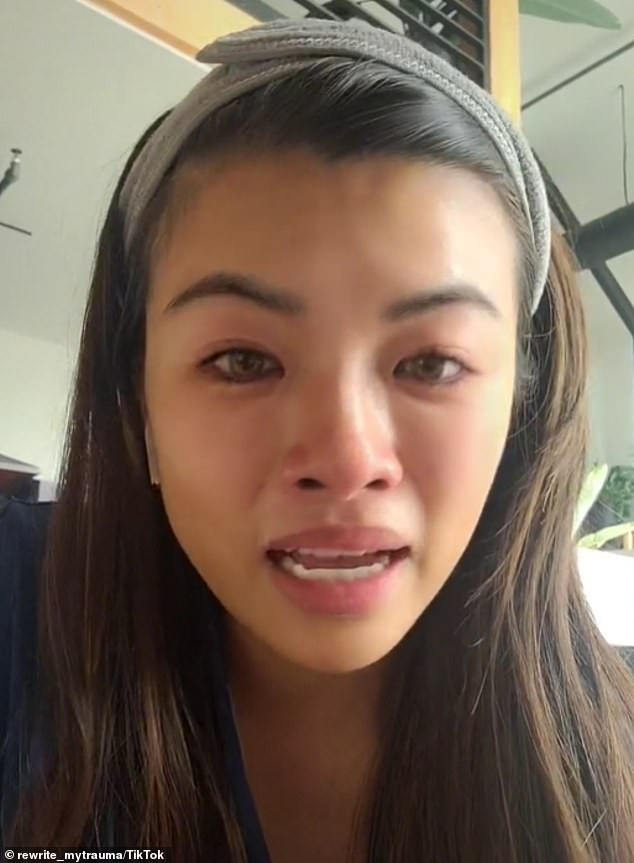 A Vietnamese-born woman living in the US has tearfully revealed that she was expected to support her younger sister by paying her college tuition and all of her bills — and when she refused, her parents disowned her.

TikToker Thea (@rewrite_mytrauma), a biotech venture capitalist with a PhD in neuroscience from UCLA, explained in a viral video that her parents sent her younger sister to the US for school, despite knowing that they couldn’t pay for it.

Thea had been charged with supporting her sister financially, and did so until her sister’s spending got out of control.

That’s when she put her foot down — but she said her parents were displeased with her decision and have called her ‘stingy’ and ‘ungrateful.’

‘I got disowned by my parents just now because I refused to fund my sister’s lavish lifestyle when she’s here in the U.S. as an international student,’ Thea, her eyes red from crying, began her video.

‘They sent her here three years ago knowing that they don’t have the means to pay for it themselves. So the responsibility for her tuition, her room and board, her living expenses, has been on me as the eldest sister in the family.

‘She has been completely ungrateful and completely irresponsible with the money. I had to pay for her debt that she owed to her friends because she spent it on shopping, on Uber Eats, on just bars and clubs, and I’m just so done with it

‘I put my foot down today because she uses my card to spend $500 on some shopping expenses,’ she continued, wiping away tears.

‘I told [my family] that I’m done, and if they want her to remain in the US. they had to figure it out themselves.

When her sister’s spending got out of control, she put her foot down and refused to pay her bills anymore. Her parents have disowned her, and called her stingy and ungrateful

‘And I was called stingy. I was called ungrateful and that I got to where I am because of my family and it is my time to pay it back. It is my responsibility to care for my parents and my siblings. So I am their retirement fund, the college fund for my younger siblings.

‘And I feel trapped. I really am. I feel trapped and betrayed by my own culture and my own family because there is that expectations that you have to care for them.

‘And I would love to. I love my parents, but there is no boundaries because I am just a wallet now. I am just solely a wallet now,’ she said.

Her video, which has nearly 20 million views since it was posted on March 26, has received thousands of supportive comments.

‘There is a difference between taking care of family and being taken advantage of!’ wrote one.

‘I’m glad you stood up for yourself. You’re not just a wallet. Be strong, never let anyone take advantage of you, not even family,’ wrote another.

‘A child should never have to pay back their parents for raising you. It’s their job as parents to do so,’ said a third.

‘I’m so proud of you,’ wrote a fourth. ‘Setting boundaries is so important.’

In follow-up videos, Thea said it is overwhelming to have received so much support, and it has been ‘comforting and heartbreaking at the same time’ to know that her story resonated with so many people.

So if me ugly crying on the internet at my most vulnerable moment is of any shape or form be of comfort in any possible way to you, I am honored,’ she said.

She also stressed the importance in setting boundaries in relationships.

‘I know that, moving forward, I need to speak up better for myself, preserving my own mental health and prioritizing my needs and wants above anything else,’ she said.