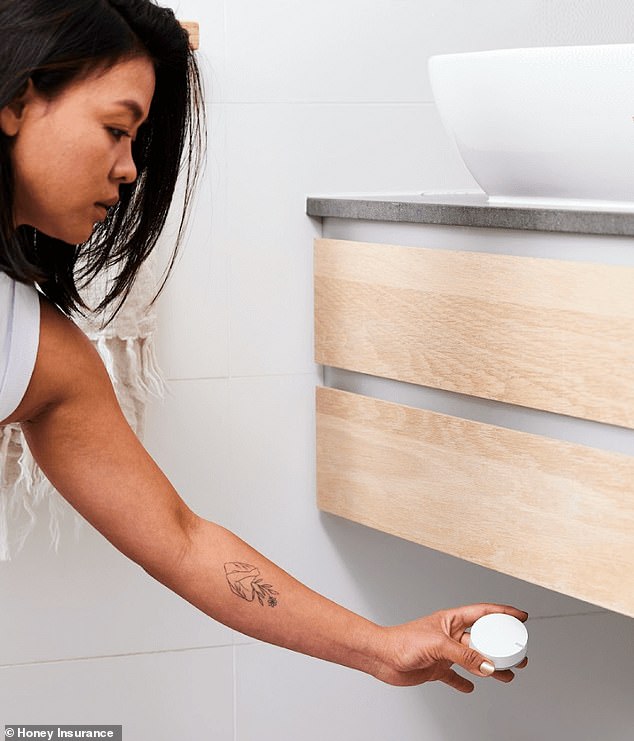 How a simple set of ‘Big Brother’ sensors developed by an Aussie disruptor insurance firm could save you $1,000 a year on your claims

Hi-tech household sensors that text you when your home is flooded, on fire or being robbed, could save you $1,000 a year in insurance claims.

That’s according to Richard Joffe, the founder and CEO of a disruptor insurance-tech start up ‘Honey’.

Mr Joffe told Daily Mail Australia the technology that costs  $250 as is given to customers for free acts like a ‘a protective angel’ around the family home.

The entrepreneur admits some might find the idea of your family home being monitored 24 hours a day a little ‘creepy’ , but he said the smart technology can save you big bucks and is the way of the future.

However, as an increasing number of smart devices make their way into the home, law enforcement agencies like the US FBI have warned that homeowners need to be wary of cybercriminals targeting gadgets designed to make life easier.

These hi-tech household sensors text you when your home is flooded, on fire or being robbed

‘The fact is that technology reduces risk,’ Joffe said. ‘It’s like having a little protective angel watching over your house.’

In 2021, there were about $5billion in insurance claims made across Australia, leaving the average family $1,000 out-of-pocket per claim.

But Mr Joffe says as high as $1.9billion of that was ‘avoidable’.

‘There are three main risks in the home. Fire, water and theft. With these sensors, we can alert customers immediately when one of these is taking place, giving you an early warning and a chance to intervene.’

‘For example if your fire alarm goes off and you’re not home it will send a notification to your phone. If you have left your garage door open you will be notified.

‘It could also tell you when a drip starts leaking from your flexi hoses under the kitchen sink, before it’s too late.’

The ‘set and forget’ technology sensors which automatically communicate to a router, are able to detect heat, water leaks, movement and if a door has been left open.

Most customers already using the technology put one under their sink, another next to their smoke detector and one by their front door or in their garage.

But such devices are not always without risk.

The ‘set and forget’ technology sensors which automatically communicate to a router, are able to detect heat, water leaks, movement and if a door has been left open

The FBI in 2019 sent out a warning that hackers can use ‘innocent devices’ to do a ‘virtual drive-by of your digital life.’

The US intelligence agency urges users to regularly change passwords, check for firmware updates and never have two devices on the same network.

Digital assistants, smart watches, fitness trackers, home security devices, thermostats, refrigerators, and even light bulbs are all on the list of devices that can be infiltrated by cybercriminals.

And if these devices, among other smart home technology, are not properly protected, they can be targeted by hackers.

‘Unsecured devices can allow hackers a path into your router, giving the bad guy access to everything else on your home network that you thought was secure,’ the FBI said in their report.

Hackers can also take control of unsecured smart TVs and use them as a bridgehead to access your router and form their get into your computer or smartphone.