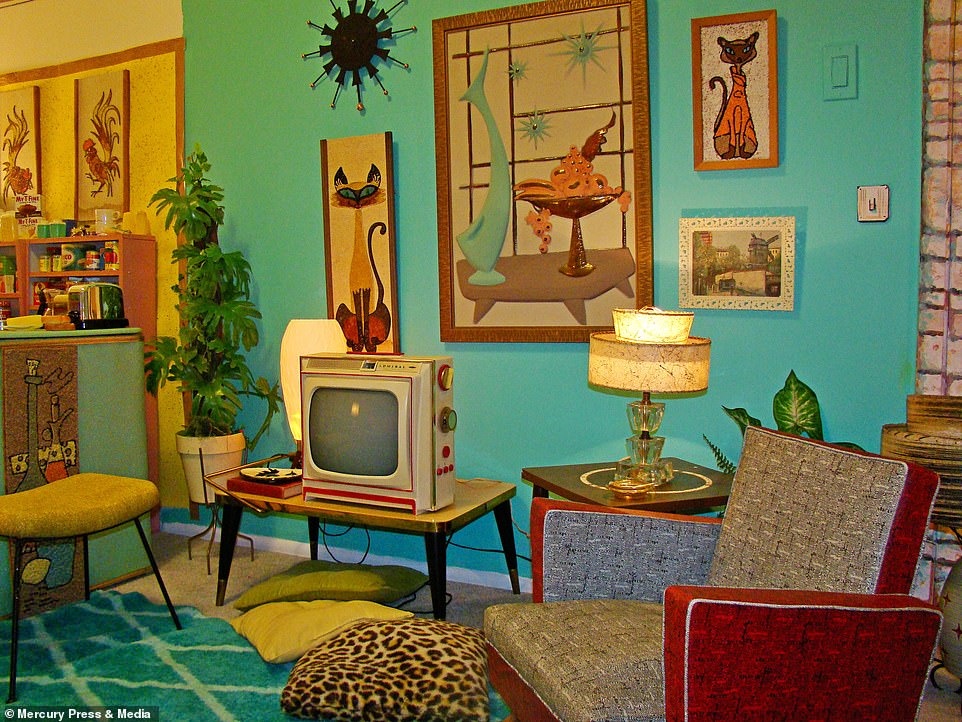 Fifty shades of fifties! Man who wishes he’d lived in the post-war era spends $15,000 transforming his home into a time capsule – complete with original food packaging, a retro TV and colorful furniture

A man who wishes he could live in the post-war era has painstakingly transformed his home into a 1950s time capsule for $13,000.

Paul Stanley Wilson, 58, from Phoenix, Arizona, has spent most of his life collecting vintage memorabilia from the post-war era and now lives in a home straight from a 1950s film set.

The post-war fanatic avoids using modern appliances such as cell phones and computers, and has forked out more than $13,000 for his unique collection of vintage items, which includes a 70-year-old sofa, a pink rotary dial phone, and even an original TV from the decade.

As well as transforming his bungalow into his dream ’50s inspired pad, the theater set painter also enjoys to dress in vintage attire and even cooks using old-school appliances.

Paul Wilson, 58, from Phoenix, Arizona has dedicated his life to collecting vintage memorabilia and has created a time capsule house from the 1950s, complete with an old television set, mid century furnishings and several cute and kitschy cat portraits

Paul admires the clothing of the time, especially the formality of men who wore suits and bow ties, and the women who wore ‘fancy hats’

Paul aims to live a ‘simpler’ life and refuses to use modern appliances such as a mobile phone and computer. He’s even using his grandfather’s 1951 Crosley Shelvador fridge, while a retro turquoise stand mixer perches on top

Paul’s retro living room is a riot of color with red sofas that are 70 years old with clashing blue and mustard cushions. He’s also brightened the space with an array of retro lamps and vintage artwork

Paul said: ‘I’m obsessed with the era because I loved all the old films as a child.

‘I was a huge fan of Dorris Day movies and anything which had Lucile Ball in.

‘There is something about the clothing of this time that I really admire – the formality of men who wore suits and the women who wore fancy hats.

‘I think that a lot of people are fascinated with the time period that preceded their lifetime and I love the mid-century because I missed the entire thing and want to relive it.

Dedication! Paul ensures that everything down to his crockery is vintage, and even the toaster he uses for breakfast is retro. He eats breakfast off Melmac plates, a brand that that popular from the 1940s to the 1960s

‘I’m fascinated by the era’s furniture and the way everything was designed – I never thought I could have that stuff till I realized there are thrift and vintage stores that sell the real stuff.’

Paul aims to live a ‘simpler’ life and refuses to use modern appliances such as a mobile phone and computer.

Despite his fascination in the era, Paul claims that he is grateful that he never had to actually live through his favorite era.

‘I like that I can pick and choose things that I want to take from that era – a lot of people say they would love to go back but they I don’t think they really would.

Paul has kitted out the kitchen with product packaging from the era for an authentic feel, and was delighted to find the previous owners had left the original oven from the house build in 1961

Paul avoids modern technology and instead uses an antique television, he also collects vintage Ken, Barbie, and Lee Harvey Oswald dolls and puts them on display

‘Barely anything in my house is contemporary, I want to keep most of my house in the mid-century theme.

‘I’m a huge fan of dressing this way too – I love the class and formality of the style so I wear the dinner jackets and bow-ties.

‘I don’t listen to any contemporary music either.

‘When I have visitors, people always say it’s like walking into a film set – I’ve even had people say it looks like the set from The Jetsons!’