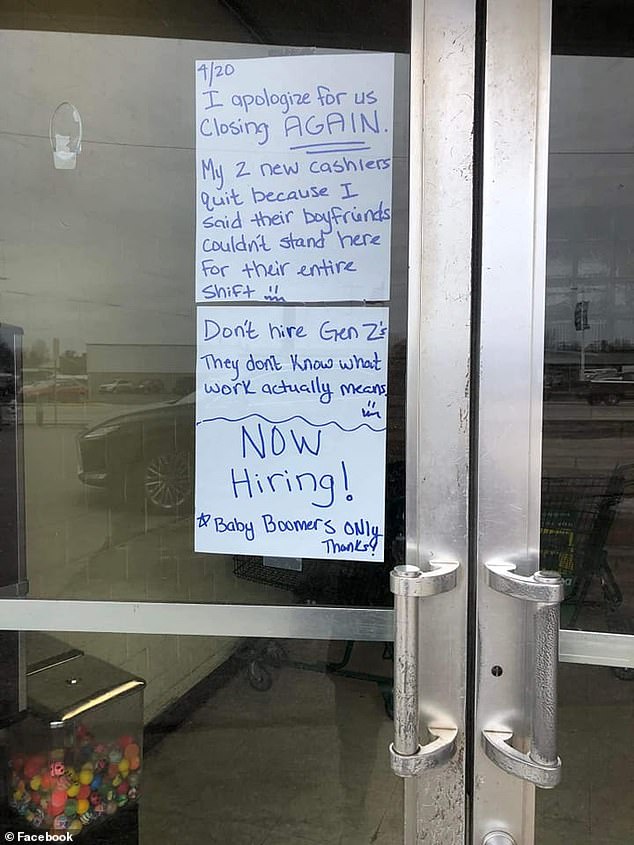 A small business owner has come under fire for the furious note he left on his shop window asking specifically for ‘baby boomer’ employees.

‘I apologise for us closing again,’ the note read. ‘My two new cashiers quit because I said their boyfriends couldn’t stand here for their entire shift.’

Who do you think is in the wrong?

The post has thousands of likes and comments, with many engaging in a heated debate regarding the legitimacy of the owner’s frustration.

‘That’s a pretty awful and ageist sign,’ said one commenter. ‘I’m pretty young and I work 48 hours a week and never sit once while I’m on the clock! There are people who are young and hard working.’

He added: ‘There are also many boomers I know of who don’t do anything. It’s all about attitude, upbringing, and motivation.’

But some thought that was the wrong way to approach the situation.

A woman responded, ‘Please take time to sit on the clock. You shouldn’t be proud of damaging your body for a boss that doesn’t care.’

‘It’s sick that this culture is normalised – people need to stop with the “grindset” and take care of themselves.’

‘I once had a job where I was required to stand eight hours a day. I didn’t DO much, yet I wasn’t allowed to sit because it would look “unprofessional.” Me cleaning the same spot over again didn’t make me look “busy” but it definitely wrecked my back.’

Another shared, ‘I worked in a convenience store when I was twenty. It was a small town and I worked 2pm-10pm alone. It was a 24 hour store and my baby boomer relief would often come in drunk.’

She added, ‘I’d have to call my manager to send her home, and I’d close at midnight because we had no one else.’

‘My boyfriend would come up for those last two hours and help me clean up and sometimes play scratch offs (that he paid for) and one day I came into a passive aggressive note posted about not allowing our boyfriends to hang out and scratch lottery tickets. I quit less than two weeks later.’

Many thought it was ridiculous to judge an entire generation based on two people – but others fixated on a more sinister reason the employees might’ve needed their boyfriends at work.

‘But why did two employees have boyfriends standing next to them their entire shift? Were they feeling unsafe in the working environment and needed support?’ asked one woman.

Another echoed, ‘There is so much information missing here. I bet the boss was creepy and made the employees feel unsafe – I can see no other reason for such a reaction.’

But several people were content to make jokes at boomers’ expense.

‘Good luck finding a boomer that wants to work,’ wrote one woman.

‘It’s so unlikely that you’ll find a load of 58-77-year-olds that want to work as a cashier – something many of them don’t even consider a “real job” – for minimum wage.’