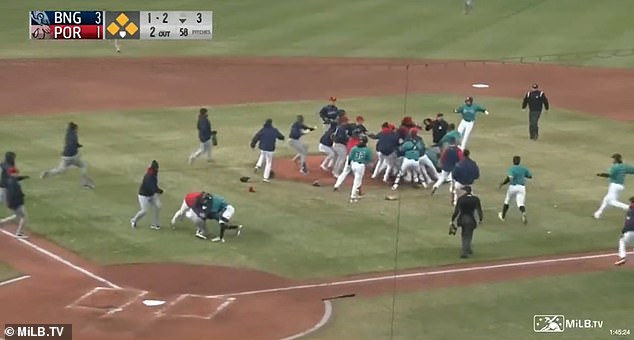 A Boston Red Sox minor leaguer sparked a brawl during a Double-A game in Maine this week by charging the mound and dropping an opposing pitcher with a right hook after getting beaned with a pitch.

Reed did not appear agitated about being struck, and instead began jogging down to first base. But when a visibility upset Renteria began demonstrably gesturing towards home plate and yelling, Reed changed course, stepped over to the mound, and dropped the pitcher with a single right hook.

Renteria then fell to the turf as both dugouts emptied and a brawl ensued.

‘Dugouts are clearing, punches are being thrown,’ the commentator said.

‘It is an all-out brawl. And here come the dugouts. Oh my goodness.

‘They are still going at it.’

Rumble Ponies spokespeople did not immediately respond to DailyMail.com’s request for an update on Renteria.

No suspensions or fines have been announced as a result of the brawl.

Spokespeople for the Eastern League did not immediately respond to DailyMail.com’s request for comment.

Spokespeople for the Eastern League did not immediately respond to DailyMail.com’s request for comment about Thursday’s brawl in Portland, Maine