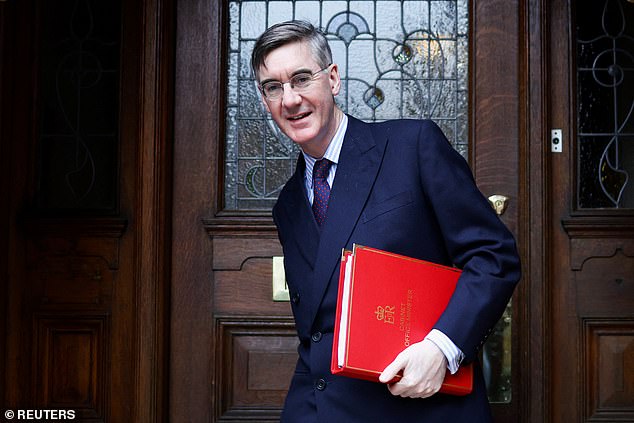 ‘Sorry you were out’: Jacob Rees-Mogg gives WFH staff a nudge as he leaves notes on civil servants’ desks urging them to get back to the office

By Martin Beckford For The Daily Mail

The minister tasked with ending Whitehall’s work from home culture has taken to leaving notes on civil servants’ desks, urging them to get back to the office.

Jacob Rees-Mogg recently started patrolling government departments to find out how many are still empty after lockdown restrictions lifted.

And it emerged last night that when he makes his unannounced visits, he leaves behind messages that are politely worded but whose meaning is clear.

Brexit opportunity minister Jacob Rees Mogg, pictured, has been touring Whitehall looking to engage with civil servants, but if he comes across an empty desk, he leaves behind a printed message

They state: ‘Sorry you were out when I visited. I look forward to seeing you in the office very soon.’ They are signed ‘with every good wish’ and carry his name and title.

It is understood Mr Rees-Mogg, in charge of civil service reform, left a number of the notes in his Cabinet Office department several days ago.

Earlier this week he had written to all secretaries of state to say they must send a ‘clear message to civil servants in your department to ensure a rapid return to the office’.

And he also published a league table showing how many officials were at their desks on an average day earlier this month. It came after the Daily Mail revealed that dozens of ministries and quangos have quietly made ‘hybrid working’ policies permanent and only require staff to be on site two days a week.

However, Mr Rees-Mogg’s notes only became public knowledge last night when a photograph of one, pinned to a green noticeboard, was posted on social media.

Opposition MPs were quick to criticise his messages as bullying. Liberal Democrat MP Helen Morgan wrote on Twitter: ‘What a pointless nasty gesture.’

There were also complaints from former Conservative ministers and senior officials.