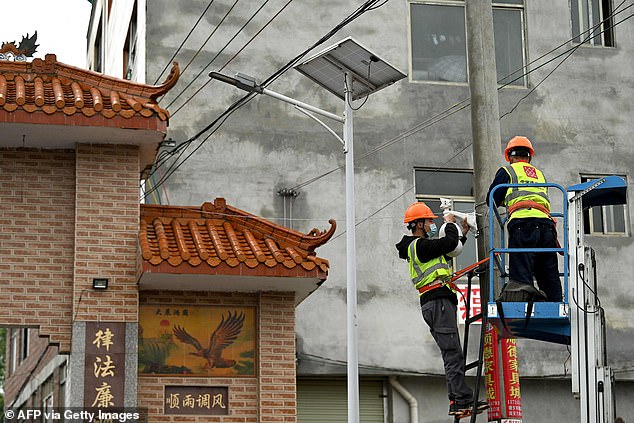 By Kumail Jaffer For The Daily Mail

The Department of Health is still using 82 Chinese-made cameras implicated in spying on the country’s Uyghur community – despite an impending NHS ban on goods made in Xinjiang.

And a government amendment to the Health and Care Bill tabled on Thursday will stop future NHS procurement of any health goods from regions linked to slave labour.

While the amendment is not targeted at a specific country or company, the language used reflects ministers’ concerns over alleged abuses in Xinjiang in China – a major hub for global supply chains.

Chinese labour programmes for Uyghurs in Xinjiang are designed to reduce the population of the minority group, a study accidentally published online states.

The report, written by academics at Nankai University, was taken offline in mid-2020 after being published in December 2019.

But an archived copy was discovered, the BBC reported.

The report states moving Uyghurs to new jobs outside heartland Xinjiang ‘not only reduces the Uighur population density in Xinjiang, but also is an important method to influence, melt and assimilate Uighur minorities.’

Ministers have come under pressure to address accusations of forced labour in the region, while Hikvision cameras are also deemed a security risk by intelligence officials.

The company’s products have already been blacklisted in the US because of their implication in the persecution of Uyghur Muslims in Xinjiang.

In a written parliamentary answer this month junior minister Edward Argar revealed: ‘There are 82 Hikvision products in use in the department.’

A Department of Health spokesman said: ‘We take the security of our personnel, systems and establishments very seriously and have robust measures in place.’

China has denied accusations of forced labour and labour transfers, which some human rights experts and foreign government have said amount to cultural genocide, along with the so-called ‘re-education centres’ in Xinjiang where some one million Uighurs have been arbitrarily detained.

The Chinese government has said that the work programmes are voluntary and are aimed at tackling poverty.

It comes as officials at the Department of Health and Social Care said Government fraud investigators are looking into contracts to supply the NHS with PPE during the pandemic.

Giving evidence to the Commons Public Accounts Committee, Jonathan Marron, the director general of the office for health improvement and disparities, said they had ‘concerns’ over 176 contracts worth a total of £3.9billion.