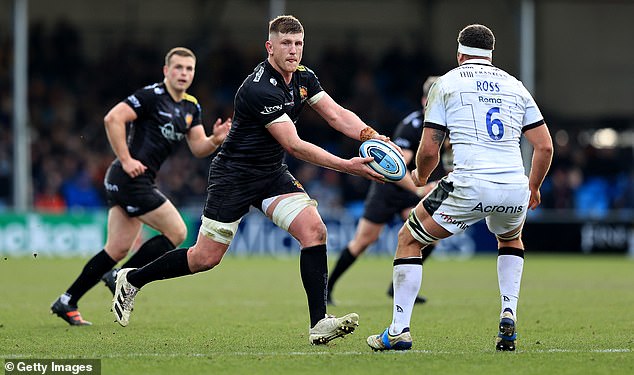 By Nik Simon For The Mail On Sunday

Exeter have promised to ‘fight like dogs’ as they begin the quest to salvage their season.

Having been knocked out of the Champions Cup last week, the 2020 European and Premiership champions are now in a battle to reach the domestic play-offs.

They are in a race for fourth place with Gloucester and Northampton, but No 8 Jacques Vermeulen believes they will thrive in adversity when they face Saracens on Sunday.

‘People are seeing us as underdogs and we’ll embrace that,’ he said. ‘When teams play against us this season, they think they can beat us.

‘The underdog tag gives you more edge. You see underdogs coming out on top all around the world in boxing and UFC. We’ll fight like dogs.

‘We need to win every game to reach the semi-finals. Harlequins had to win their last game last season to get into the semi-final and it could be special.

‘I believe in every guy in the squad and the coaches. It’s a massive mountain to climb and to reach the peak would be amazing.’

However, Vermeulen said: ‘We can take it easy or we can go for it. We’re going for it.’