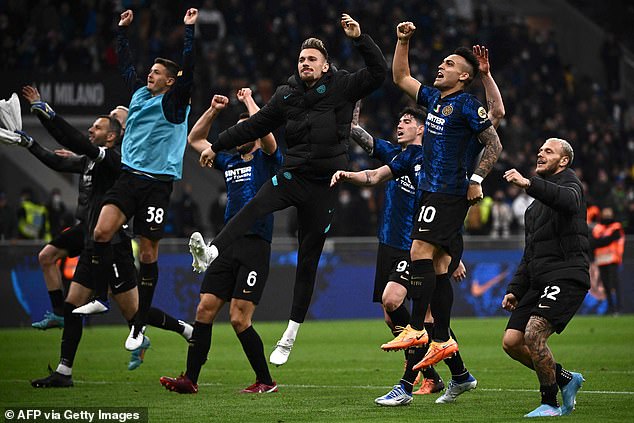 Champions Inter Milan moved to the top of the Serie A standings after they earned a 3-1 victory over AS Roma on Saturday.

With rivals AC Milan not in action until Sunday against Lazio, Inter took full advantage to move to the Serie A summit after beating a Roma side who had gone 12 games unbeaten in the Italian top flight before their trip to the San Siro.

Flying full-back Denzel Dumfries fired his side into the lead on the half-hour mark, before a fine solo effort from Marcelo Brozovic double the dominant hosts’ advantage five minutes before the break.

Argentine striker Lautaro Martinez headed home from a corner in the 52nd minute to make it three for Inter.

Henrikh Mkhitaryan fired home in the 85th minute but it was too little too late for the visitors. Inter’s fourth successive league win moved them on to 72 points from 33 matches, one ahead of Milan. Roma stay fifth on 58 points.

‘I was very afraid of this match because it came three days after the derby (against Milan in the Coppa Italia) where we had given everything,’ Inter coach Simone Inzaghi told DAZN. ‘We needed to put in a important performance and the guys delivered.

‘I think this is such a crucial victory in our season. It’s an intense moment, we should be good at managing mental forces and energies with several close matches to come, we want to play them with our chests out.’

Roma coach Jose Mourinho was given a warm reception from fans who have not forgotten his greatest managerial achievement when he won an unprecedented treble of the Serie A title, Coppa Italia and Champions League crowns with Inter in 2010.

But Mourinho’s team were on the back foot from the off as Hakan Calhanoglu arrowed a strike from distance just past the post.

Inter remained in the ascendancy but Roma, with their only real chance of the first half, should have levelled through Gianluca Mancini, with the defender heading wide from a corner.

That miss proved costly as Brozovic, who opened his Serie A account for the season only last week, then rifled a strike into the top corner to put Inter in command.

Martinez had scored against Spezia last weekend and netted a double in Inter’s Coppa Italia semi-final win over Milan in midweek, and he continued his goal-scoring streak with a bulleted header.

Armenia Mkhitaryan’s finish was a fine one, his fifth league goal of an impressive season, but Roma got what they deserved having been outclassed by the impressive champions.

‘Inter are Inter, they are the best team in Serie A with players great in every aspect, but with all due respect, there are many animals in their squad  ‘in a good way,’ Mourinho told DAZN.