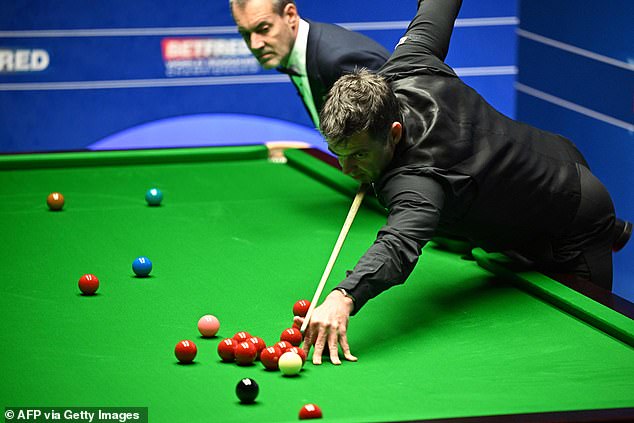 By Neil Goulding For The Mail On Sunday

Snooker magician Ronnie O’Sullivan conjured up his inner Bruce Lee as he set Crucible history at the Betfred World Championship on Saturday.

O’Sullivan won a record 71st Crucible match as he booked his spot in a 20th quarter-final at the sport’s spiritual Sheffield home.

Mark Allen told the world No 1 the event was ‘not the Ronnie O’Sullivan show’, with O’Sullivan’s quest to level Stephen Hendry on seven world titles being filmed by a documentary crew.

But the fired up Rocket, 46, easily beat the former Masters champion 13-4 with a box-office show.

He said: ‘It’s probably down to quite a few things, years of practice, years of dedication. Years of trying to be the best version of yourself that you can be. If you look at Bruce Lee he probably trained many, many hours, not just physically but mentally.

‘We are experts at what we do, but in different fields. We aim high.

‘A lot of my heroes would be Bruce Lee, Ayrton Senna, Michael Jordan. I try to approach my sport no differently to them.

O’Sullivan plays Stephen Maguire next — and he insists there are plenty of lions still in his way.

‘There are a lot of lions left in this tournament. The likes of John Higgins, Mark Williams, Neil Robertson and Kyren Wilson.

‘That’s what you need to win the world title. A big heart. Some people have that and some don’t. I’ve always had a big heart.’