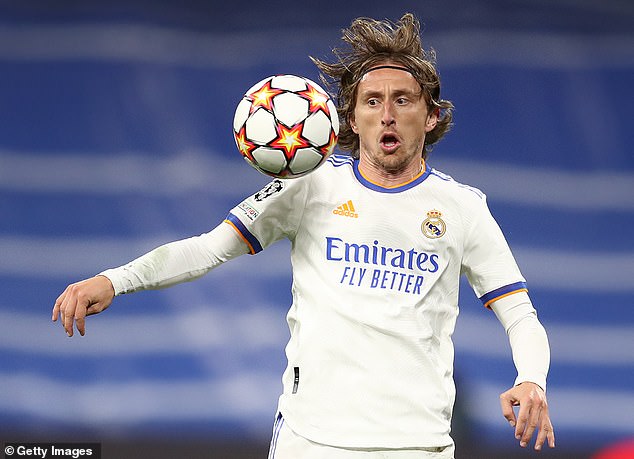 ‘Luka is still a magician’: Manchester City star Ilkay Gundogan fawns over Real Madrid maestro Modric ahead of crucial Champions League semi-final … as the German says his assist against Chelsea left him ‘speechless’

By Joe Bernstein for The Mail on Sunday

Ilkay Gundogan has praised Real Madrid ‘magician’ Luka Modric as a flag-bearer for midfield players around the world ahead of their big Champions League showdown this week.

At the age of 36, former Tottenham star Modric is chasing his fifth Champions League crown and represents a major threat to Manchester City in their semi-final first leg at the Etihad on Tuesday.

Gundogan, who plays a similar creative anchor role in Pep Guardiola’s team, is particularly impressed with how the Croatian broke through Lionel Messi and Cristiano Ronaldo’s domination to be voted the best player in the world after leading his country to the World Cup final in 2018.

‘Luka is still a magician. His assist for Rodrygo in the last round against Chelsea left me speechless,’ admitted City star Gundogan. ‘The way he plays always seems smooth and calm.

‘When he won the Ballon d’Or, I was so happy because it was finally a player in my position.

‘He and Toni Kroos do a great job. They have been important to Real for so many years now, under different coaches.

‘Real knocked out Paris Saint-Germain, they knocked out Chelsea — that already shows how strong they are this season.

‘We know what they are capable of. It is always important to start with a win but even more when the second leg is played in the Santiago Bernabeu. We know what power that stadium can unleash.

‘It can turn a game upside down from one moment to the next.’

Madrid are cruising to the La Liga title in Spain, 15 points clear of arch-rivals Barcelona, and the semi-final should be more to the purists’ liking after City’s remarkable battle to get past Atletico Madrid in the quarter-finals.

‘The second leg was a bit chaotic,’ said German international Gundogan, with some understatement, after both sets of players squared up to each other and Atletico defender Stefan Savic lost his cool.

‘The atmosphere was heated but we got through. The Champions League is a big goal for me personally, but also for us as a team. After losing the final last year, we’ve grown and improved.

‘There are only four teams left but we have strong competition in Real Madrid, Liverpool and Villarreal, who have done a very good job so far.’