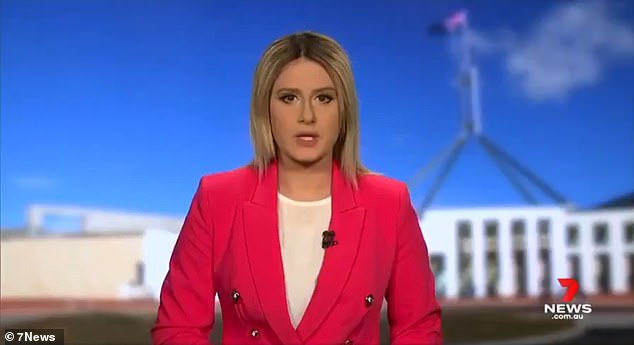 Outrage continues to grow on social media after a TV reporter revealed she was given a ‘vax stamp’ upon entering a bar.

Jennifer Bechwati, a political reporter at 7 News, took to Twitter to show her temporary ink moments after walking through the doors of the Reveley Bar in Perth this week.

Alongside an image of the stamp on her wrist, Ms Bechwati wrote: ‘Vax checked. Stamped as we entered.’

It didn’t take long for Twitter to light up, with both media identities and punters enraged by the pub’s requirement.

Western Australian Senate Candidate for the Liberal Party Kate Fantinel stated: ‘I apologise on behalf of Western Australia’ while Sky News host Chris Kenny said it was a ‘disgrace’.

‘One country we are, 95 per cent or more vaccinated and this sort of draconian nonsense is still being enforced by state governments.

‘What a crying shame… what a disgrace.’

Others tweeted the move from the bar was ‘creepy’, ‘sick’ and ‘insane’ before questioning whether Australia was actually a free country due to draconian measures evident in certain states.

Another said the vaccination stamp was ‘absolutely and utterly pointless’ and wondered why ‘Australia is 6-8 months behind the rest of the world’ while a third jokingly asked if the bar staff also wanted to know ‘religious beliefs’ of patrons.

Additional Twitter users stated ‘obeying is part of the problem’ when it comes to mandatory jabs, while another compared the vaccinated to ‘human cattle’.

In a shock twist, the Reveley Bar said they had no issue with the vaccination stamps.

‘We are required, by law, to only allow fully vaccinated patrons into our venues and face huge fines if we do not undertake this check,’ a spokesperson told news.com.au.

‘So we check the vaccination status and then use a stamp so that we don’t have to ask patrons multiple times to show us confirmation of vaccination.