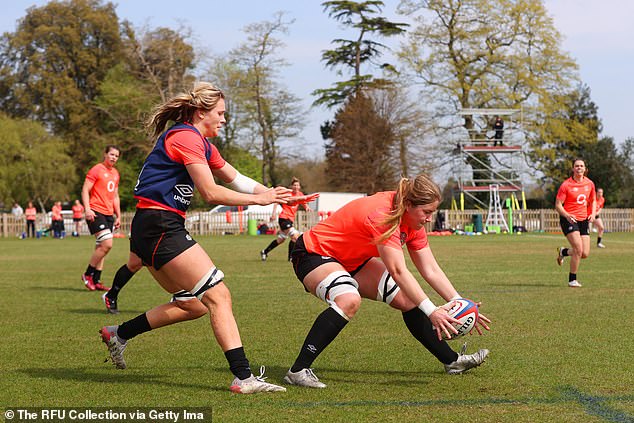 England women are dreaming of a Twickenham sellout after hitting record ticket sales of over 15,000 for Saturday’s Six Nations clash against Ireland at Leicester’s Welford Road

By Nik Simon For The Mail On Sunday

England’s Red Roses are dreaming of packing out Twickenham after hitting record ticket sales for Sunday’s game against Ireland.

More than 15,000 tickets have been sold for this afternoon’s Six Nations fixture at Welford Road.

Scrum-half Leanne Infante, who is set to win her 50th cap, said: ‘We’re now going to men’s Premiership clubs and filling the stadiums.

‘We’ve outgrown some of the grounds we used to play in. Back in 2015, I wouldn’t have thought that would happen.

‘The energy from the crowd really lifts you. It’s really loud on the day, like the men’s game, and hopefully one day we can bring that to London.

‘That’s everyone’s dream, isn’t it? The goal is to fill out Twickenham one day. That would be insane.’

With one eye on the World Cup, head coach Simon Middleton has rotated the No 9 jersey

With one eye on the World Cup, head coach Simon Middleton has rotated the No 9 jersey between Natasha Hunt and Lucy Packer and has used the competition to build depth for this year’s tournament in New Zealand.

‘It will be an emotional day with a lot of my family at the game,’ added Infante.

‘Emotions have been high around selection but that’s what we want to a certain degree because we’ve got a big year ahead of us.’