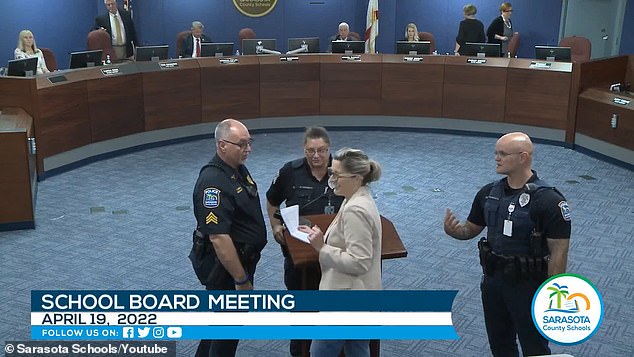 A conservative school board member began squabbling with her liberal colleague over attempts to silence and angry parent which saw cops summoned.

Bridget Ziegler rounded on chair Jane Goodwin at the Sarasota County board meeting Tuesday when Goodwin took mom-of-four Melissa Bakondy to task after Bakondy began speaking at the mic.

The drama began when Bakondy got up to the podium for the public comment period to complain about a policy regarding recording parent-teacher meetings.

When Bakondy began to remark that one board member was ‘caught on the microphone’ at the last meeting, board chair Goodwin cut her off and said ‘stop talking about school board members.’

Goodwin, who leads the board’s liberal majority, then ejected Bakondy and said ‘You were about to say something horrible about Shirley Brown. … You’ve said things about me that were untrue. Leave, please.’

But when Goodwin went on to ask Bakondy if she even had children in the school district, that’s when conservative board member Bridget Ziegler clapped back by raising a point of order.

‘That is not appropriate. … You don’t get to ask people who come to a public meeting whether they have children or not. Period. You are way out of line,’ said Ziegler.

When liberal board Chair Jane Goodwin (left) asked Bakondy if she even had children in the district, conservative board member Bridget Ziegler (right) told her she was out of order

It is unclear what exactly Bakondy had to say. She is vocal about hot-button social issues on her Facebook page, and has taken a conservative stance on the issue of transgender children, which have roiled school boards across the US.

Bakondy told Fox News Digital in an interview that she is a mother of four and has three children returning to public school next year.

Zeigler told the outlet that it is ‘inappropriate’ for Goodwin to raise the question about Bakondy’s children, because the board is accountable to all voters.

‘We work for the people, the people are our bosses, the parents are our customers,’ said Zeigler. ‘And it’s interesting when it comes to collecting taxes, it doesn’t seem like these qualifying questions are asked.’

Goodwin did not immediately respond to a request for comment from DailyMail.com but told ABC affiliate WWSB-TV that the board chair has the power to remove anyone being disorderly at a public meeting.

‘We had a person who was speaking, who was out of order,’ said Goodwin. ‘She was talking about personal issues, abuse and making comments that weren’t true about board members.’

Zeigler (left) said that it is ‘inappropriate’ for Goodwin (right) to raise the question about Bakondy’s children, because the board is accountable to all voters

Bakondy told the outlet that her ‘first amendment rights were trampled on actually’ when she was ejected.

It is just the latest dispute at a local school board meeting to grip the attention of a worried nation.

Local press reports indicate that Bakondy regularly attends school board meetings to voice her opinions on such topics as mask mandates and critical race theory.

At Tuesday’s meeting, she was disputing a district policy regarding the ability of parents to record meetings with teachers to discuss individual education plans.

The mother slammed board chair Goodwin as ‘the queen of no public input.’

‘Every citizen, taxpayer and parent has a right to speak at public meetings and share their input,’ Bakondy said.

‘Ms. Goodwin doesn’t want to hear that. … This is the ultimate form of censorship, and they are destroying our school district, targeting parents and eliminating dissent.’