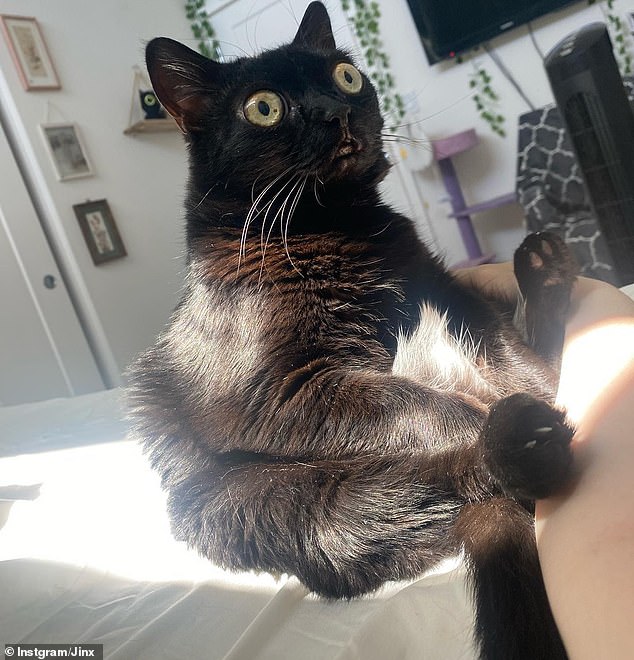 Playing at paw-itics! Black cat named Jinx with massive social media following for her huge eyes and oversized feet is named MAYOR of Hell, Michigan – for a day

A black cat with enormous eyes and giant feet is set to make history and become the first mayor of a small Michigan town with a demonic name.

Jinx was given the keys to govern Hell, a township located 20 miles northwest of Ann Arbor with an estimated population of 72 people, on Sunday at 4 p.m.

The cat’s owner, Mia, lives in California with her famous feline, who she rescued in 2018. Jinx was only about three weeks old when she was found by Mia in a field behind her house.

Throughout the years, Mia noticed that Jinx’s eyes were only getting bigger even after the cat stopped growing. The black feline also developed large feet, prompting her to walk funny.

‘She learned how to land on her feet only around a year ago,’ Mia told Newsweek. The cat owner doesn’t share her last name or specific location because of her pet’s booming online popularity.

Jinx is set to become the mayor of Hell, Michigan, for a day starting on Sunday at 4p.m.

Jinx and her owner, Mia, both live in California

She also recalls the time she took Jinx to the vet due to being fearful of her pet’s health condition.

‘She had big eyes and as she grew bigger, her eyes didn’t get smaller and I also noticed she had big feet. She doesn’t have a condition and the vet says she’s healthy,’ Mia said. ‘She just has these birth defects. She’s also not as agile as most cats and is a little clumsy. She only learned how to land on her feet a year ago.’

The feline became an internet sensation thanks to those same birth defects, with her owner constantly posting pictures and video of her pet’s unique appearance on a daily basis for the past three years.

On April 8, however, Mia asked around social media if her popular cat could ever run for mayor anywhere in the country.

‘Isn’t there some town that made a dog the mayor?’ she asked on Twitter. ‘Can we make Jinx mayor or something somewhere?

Much to Mia’s surprise, she received answers from people living in Hell, where anyone—human and animals, too —are eligible to become mayor for just a day, with a $100 donation made to the township. A fee of $25 is all that it takes to be mayor for just one hour.

‘Jinx is going to be mayor in three days,’ Mia told her Twitch followers on Thursday. The cat’s fans responded by suggesting that Jinx should be rewarded for her public duty, suggesting delicacies including salami and cat treats.

‘She also wants big murals of her and the mandatory following of her social media,’ Mia told news outlets about Jinx.

The township of Hell, Michigan, has a population of nearly 70 people and allows people to pay to become mayor for a day

The prizes that come along with being mayor of Hell for a day come with ‘horns, a T-shirt, a mug, a badge and a mayoral proclamation certificate’, among other things, as well as an impeachment call at the end of the day.

Jinx will also be given her very-own square inch property in the township.

‘We love our in-person and distant mayors,’ said Reverend Vonn of Hell, who will also be announce Jinx as mayor over the phone. ‘They get to have one Helluva fun day and at the end of it, will receive the dreaded phone call to be impeached.’

Mia will be broadcasting the furry mayor’s proclamation via Jinx’s Twitch page at around 4 p.m. ET (1 p.m. PT.).