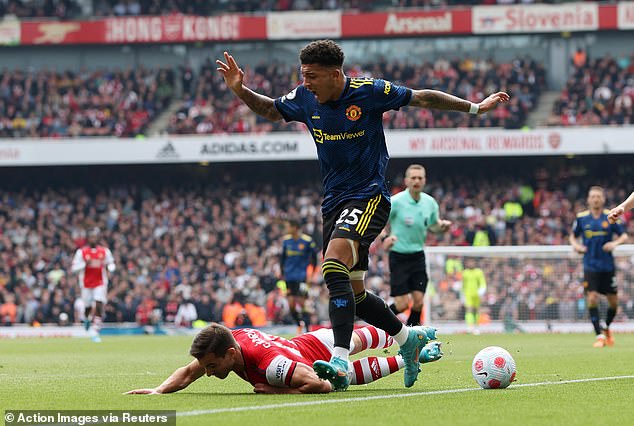 ‘So the VAR is working now after sleeping on the handball?’: Man United fans rage at injustice after being denied penalty shortly before soft foul on Bukayo Saka in the box was given for Gunners

Manchester United fans were left fuming at the ‘inconsistency’ of VAR after being denied a penalty against Arsenal.

Ralf Rangnick’s side appealed for a spot-kick when Cedric Soares appeared to use his hand to take the ball from underneath Jadon Sancho’s feet in the box, but Craig Pawson was unmoved and VAR did not intervene.

Moments later, those at Stockley Park did step in when Alex Telles forced Bukayo Saka over at the other end and the Gunners were awarded a penalty. Saka himself stepped up to score and give his side a 2-0 lead.

With United also feeling they should have had a penalty when Anthony Elanga was brought down by Nuno Tavares, supporters on social media were not best pleased.

‘So the var is working now? But they slept on the handball okay,’ one United fan tweeted.

‘Handball in the box and Elanga fouled in the box too but nothing given,’ another said. ‘Shocking decisions.’

It goes from bad to worse for Man Utd…

Alex Telles was judged to have fouled Bukayo Saka, who made it 2-0 from the spot after VAR intervened. pic.twitter.com/FO01aaKEoD

‘Don’t look at the handball but look at that, that’s why var is so inconsistent’, said a third fan.

‘This sport is finished lol. A 50/50 collision in the box is a penalty but a clear handball and getting pulled from behind aren’t,’ another fumed.

One supporter joked that Arsenal were ‘paying the ref’, while another tweeted: ‘It’s been a while since we’ve had some ridiculous VAR antics’.

However, there were no complaints from Rio Ferdinand on BT Sport, as he admitted that Telles’ foul on Saka was ‘definitely a penalty’.