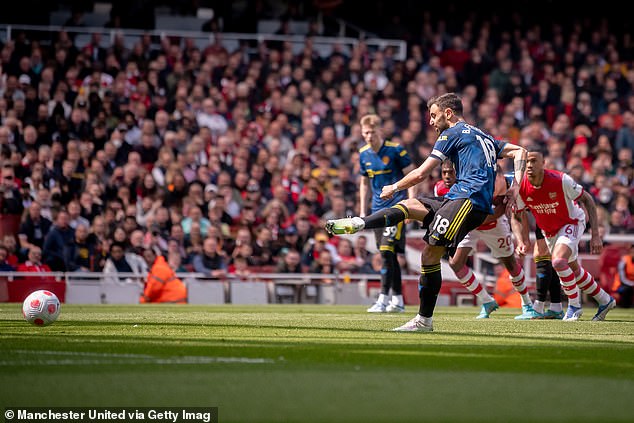 ‘He just didn’t feel he should take it’: Ralf Rangnick reveals it was Cristiano Ronaldo’s decision NOT to take Man United’s second-half penalty in Arsenal defeat… as furious fans blast Bruno Fernandes for hitting the post

Manchester United interim boss Ralf Rangnick has revealed it was Cristiano Ronaldo’s decision to not take the penalty missed by Bruno Fernandes against Arsenal, as fans took to social media to display their frustration.

Ronaldo took and scored from the penalty spot when the two teams met earlier in the season, as United won 3-2 at Old Trafford.

But it was Fernandes who stepped up and struck the post this time as the Red Devils lost 3-1 and Rangnick says the decision was down to Ronaldo.

He said: ‘I spoke with him after the game and asked him and he said he just didn’t feel he should take it and that’s why he said it would be better if Bruno took it.’

Fernandes has come under huge scrutiny from United fans on Twitter, with some claiming he should have left the penalty to his compatriot.

One fan Tweeted: ‘Bruno Fernandes or any other player shouldn’t take penalties when Cristiano Ronaldo is on the pitch. Period.’

Another accused Fernandes of being a ‘spoiled brat’, saying: ‘Bruno Fernandes is a spoiled brat. How do you not let Ronaldo take that penalty, knowing the importance of the moment. Sums up the united season, egos getting in players ways and hurting them.’

‘Still can’t believe they chose @B_Fernandes8 to be our captain when we have @Cristiano The level of disrespect in this team toward Ronaldo is out of this world . Then Bru- No goes on to miss the penalty when one of the greatest penalty taker in our team. Wtf is going on?,’ a third United fan wrote in frustration.

Even Arsenal fan, Piers Morgan, couldn’t help but make a joke of the situation. He Tweeted: ‘Many thanks to Bruno Fernandes for insisting on taking United’s penalty when Ronaldo’s on the pitch, & then doing that. Comically bad captaincy.’

Saka doubled the lead with a penalty in the 32nd minute before Ronaldo pulled one back for the visitors two minutes later.

The defeat for United was sealed 20 minutes from time after Granit Xhaka got on the scoresheet with a powerful long-range strike past De Gea.

Rangnick believes the performance was an improvement from the midweek 4-0 loss to Liverpool but he rued some of the defending from his side.

‘I think we showed a response, an improved performance compared to the game at Liverpool,’ Rangnick said.

‘But still we gave away an easy goal, an early goal, far too easy, the way we defended in that moment, we had two or three chances to clear the ball.’