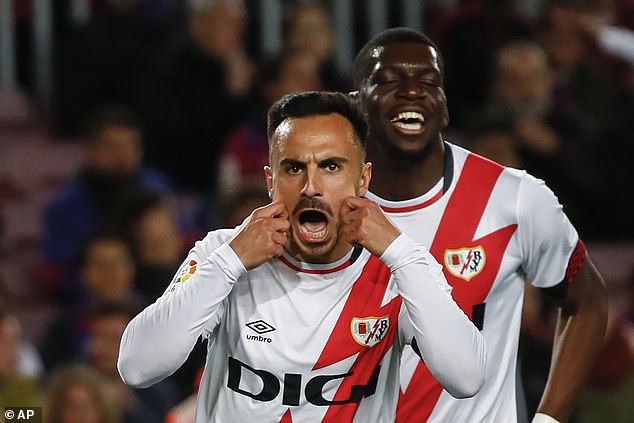 By Peter Jenson For Mailonline

Barcelona lost their third consecutive home game under Xavi and their season is now threatening to fizzle out in the same way it started under Ronald Koeman – flat, ragged, uninspired, ordinary.

This was only the second time in the club’s history that they had been beaten three times on the bounce at home and each defeat has felt more insipid.

Eleven minutes were added on at the end of the game and that became 13 minutes when a cigarette lighter was thrown on to the pitch. But as Gerard Pique said earlier in the season: we could have played for three hours without scoring.

They are still six points inside the Champions League places but after losing to Eintracht Frankfurt at home in the Europa League and Cadiz at home in La Liga this was defeat to a team that had only won two away all season.

Gavi ran himself into the ground in midfield and there were sparks from Ousmane Dembele but little else.

Rayo got the winner on seven minutes when Alvaro Garcia made a diagonal run from the left wing to centre forward position. Isi Palazon picked him out and for all that Sergino Dest had followed the forward he had time to control and shoot past Marc Andre ter Stegen.

Barcelona had lost to Rayo away earlier in the season when an Radamel Falcao was the difference between the two sides and the final straw for the board who sacked Koeman after the defeat.

Come the midway point of the first half the Camp Nou had began to timidly whistle some of Barcelona’s more casual play. Xavi was frustrated too and when he felt Gavi should have been awarded a penalty in a clash with Alejandro Catena and the coach was booked.

Rayo also helped Barcelona back into the game when Stole Dimitrievski gave the ball to Catena in the six-yard box and Pierre-Emerick Aubameyang charged him down. Dimitrievski recovered but skied his clearance. When it dropped to Frenkie de Jong he played it to Dembele and he crossed for Aubameyang who couldn’t finish.

Barcelona came close again just before half time but Ferran Torres was offside when he hooked he ball into the far corner after Gavi’s shot came back off the crossbar. Gavi and Dembele had at least ruffled a few Rayo feathers. Dembele ran at their defence on 45 minutes and drew a foul and a yellow card for Catena. He then fired the free-kick over the bar.

Ferran Torres put the ball in the back of the net from the rebound, but he was offside

With no second half improvement Frenkie de Jong was taken off on the hour and replaced by Nico Rodriguez. Ferran Torres was replaced by Memphis Depay. De Jong took it badly going straight down the tunnel towards the dressing room without so much as looking across at Xavi. If Erik ten Hag really wants Manchester United to move for the Dutch midfielder they might not have to push to hard to make it happen.

There were more radical changes with 20 minutes left as Xavi took off Aubameyang and Eric Garcia and, to great applause from the Camp Nou, sent on Luuk de Jong, and Adama Traore. Almost immediately Ter Stegen almost mis-controlled over his own line – things were getting worse not better.

Luuk de Jong’s first chance came from Gavi’s cross but his acrobatic scissor kick made contact with Isi and not the ball drawing blood from the side of his head leaving the Rayo winger with blood streaming from a cut above his ear. De Jong was booked.

There were chances late on but Dembele was offside when he hit the post. And from Barcelona’s last chance Catena cleared his effort just in front of the line.

Earlier it might have been even worse for Barcelona when substitute Pathe Ciss broke and hit the post. One was enough for Rayo and it will now be a long week at Barcelona before they play again next Sunday.

Ousmane Dembele had multiple efforts on goal, but could not find the back of the net

Speaking after the game, Xavi insisted his side should have earned at least a point, but admitted they were made to pay for making such a slow start.

‘We deserved more,’ said the Barça coach. ‘It’s true that in the first half we weren’t ourselves but in the second half we improved.

‘The ball just would not go in. It’s very similar to the game against Cádiz. Other teams are playing for their lives and we have to match the desire of our opponents.’

It was another game in which Barcelona had started poorly conceding after seven minutes. ‘There are games that get complicated because we don’t start as we should,’ said Xavi. ‘If you take the lead then you have everything under control. We don’t lack personality, we just need to start games better, it’s a shame because it was a golden opportunity.’