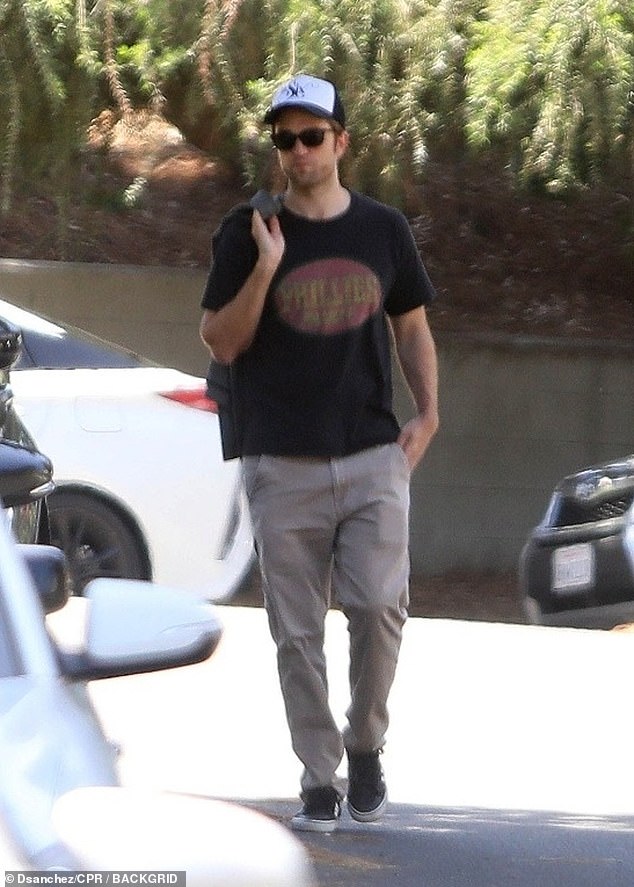 Robert Pattinson kept his look casual on Saturday as he took a stroll around Los Angeles, after a weekend party at a friend’s house.

The Batman actor, 35, donned a pair of taupe trousers, matched with a black Phillies T-shirt.

He threw a grey jacket over his shoulder, keeping comfortable in a pair of black Adidas trainers.

Low-key: Robert Pattinson, 35, cut a casual figure on Saturday while on a Los Angeles stroll after enjoying a weekend party with pals

He shielded his eyes with black sunglasses, adding a white and black baseball cap to the ensemble.

Robert had a stoic look on his face as he walked around in the sun, later placing his coat back on.

The outing comes as Robert is still reeling from the giant success of his debut as Warner Bros’ Batman.

Comfortable: He donned a pair of taupe trousers, matched with a black Phillies T-shirt as he walked with two pals

The Batman dominated the box office, bringing in $36.8M three weeks into its theatrical run in the US.

Soaring numbers made the film the highest grossing movie of 2022, and the second highest in the pandemic era, trailing only behind Spider-Man: No Way Home.

The London native admitted that he was ‘terrified’ for the movie to come out, revealing that his girlfriend Suki Waterhouse even shed a tear watching it.

During an appearance on the Jimmy Kimmel Show, he explained: ‘I was absolutely terrified. I haven’t been this scared to release a movie in such a long time and I haven’t released a movie in a really long time.’

‘I watched it with my girlfriend as well…It was really her reaction that kind of changed the entire thing.

‘Because I’m pretty sure she’s not normally into watching superhero movies. And just seeing that it was capturing her attention the entire time, and then she held my hand and just touched it right there,’ Robert said touching his cheek.

Superhero: Robert’s The Batman dominated the box office, bringing in $36.8M three weeks into its theatrical run in the US (pictured in the film)

In love: He said that he ‘felt a tear’ from his girlfriend Suki Waterhouse while watching The Batman (seen in 2020)