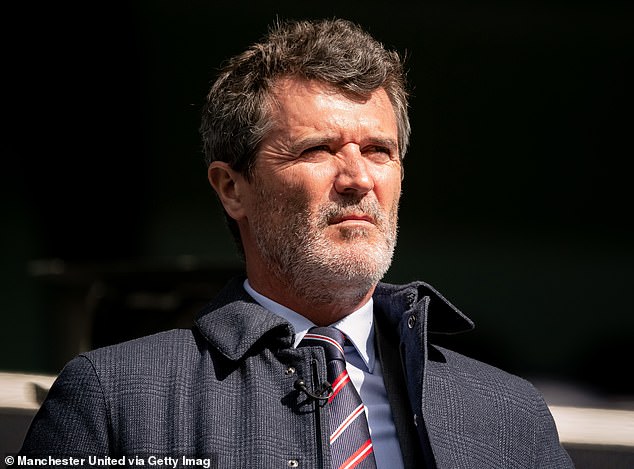 Roy Keane ‘is interested in being the next Hibernian manager and has spoken about the job with friends’, as Scottish club hunt new permanent boss after Shaun Maloney was sacked

Ex-Manchester United captain Keane currently works as a pundit with both Sky Sports and ITV but has expressed a desire to return to management.

And The Times are reporting that Keane – who was heavily linked with a return to Sunderland in February – has discussed the Hibs job with friends.

However, the report adds that the 50-year-old will be way of what happened to Shaun Maloney and Jack Ross, who were both dismissed somewhat brutally by owner Ron Gordon.

Maloney was dismissed last week after only 120 days in charge following the Scottish Cup semi-final defeat to Edinburgh rivals Hearts.

Ross, meanwhile, was sacked earlier this season despite leading Hibs to the League Cup final amid a poor run in the league.

Keane has not been the No 1 in the dugout since 2011, when he was dismissed at Ipswich

After taking his first job at Sunderland, Keane took charge at Ipswich Town for 18 months.

He has also been an assistant manager at Aston Villa, Nottingham Forest and the Republic of Ireland national team, working with Martin O’Neill.

Keane, known for his no-nonsense style on and off the pitch, has not been the No 1 in the dugout since January 2011, when he was dismissed at Ipswich.