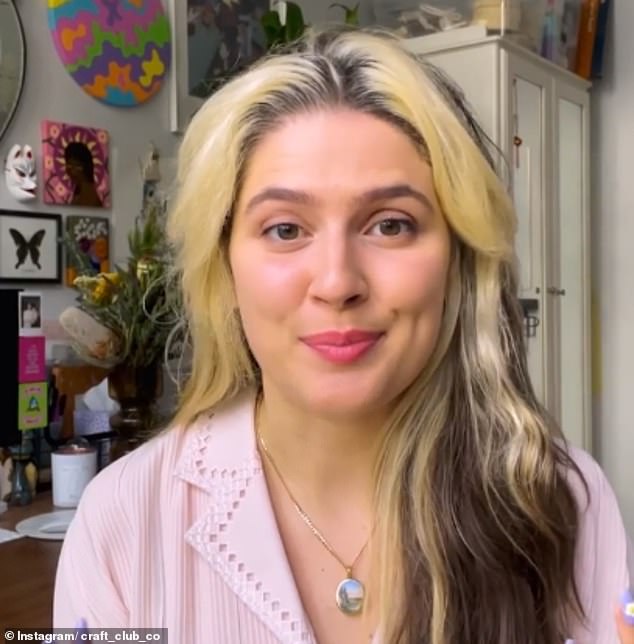 Sydney-based Nakisah Williams is the founder of DIY brand Craft Club, an independent company that sells rug making kits for around $89 (£50).

She was horrified to discover stationery brand Typo, part of the Australian Cotton On Group, was selling an almost identical product for $59.99 (£34).

The Typo product, which has since been removed, also used a technique called latch hooking and featured a similar floral design.

Sydney-based Nakisah Williams is the founder of Craft Club, an independent company that sells rug making kits for around $89 (£50)

Nakisah was horrified to discover stationery brand Typo (below), part of the Australian Cotton On Group, was selling an almost identical product to her Craft Club kit (top)

Typo removed the product from their website after receiving a flood of comments about the situation and have claimed that they are now in contact with Nakisah.

The business owner initially took to Instagram to call out Typo for ‘stealing’ her product.

She wrote: ‘I am heartbroken. As a small business owner who has worked so hard on creating our best selling rug kits, this is such a blow.

‘For a company with as much power and resources as @cotton_on_group to blatantly copy a unique product from a small Aussie business is horrible. Especially at a time when retail is struggling and the pandemic has made small businesses so much more vulnerable.

‘And then to completely ignore over one hundred messages and comments calling out their theft, the lack of accountability is gut wrenching.  Since they’ve removed their reel and disabled comments on their Instagram, it’s been so awful feeling like our voice has been lost. But seeing your messages of support has meant the world.

‘Please share this post to raise awareness for what Typo have done. Tag @typoshop to show that we will not let them throw this under the rug, as they have done so many times before.

‘A company like @cotton_on_group can’t just hide behind performative feminism and performative activism. When behind the scenes they steal from small businesses and female founders. Practice what you preach Typo. Don’t be a d***.’

The post racked up over 1,000 likes and a stream of comments as Instagram users showed their support for Nakisah’s claims, despite her brand not being registered to give their products legal protection.

One person wrote: ‘I am shocked and saddened for you. Will be boycotting typo from now on.’

Posting on Instagram, Typo reassured critics that they are listening to the backlash and have contacted Nakisah directly. The company later revealed it had removed the product

Another said: ‘Your designs are so much better anyway! Sending you love girl’

Typo wrote: ‘In response to claims from Craft Club about a DIY rug-making kit sold by Typo, we acted quickly to acknowledge the concern and work with Craft Club to resolve it.

‘In this instance, we have identified similarities and we have pulled the item from stores and online globally. We’re working to resolve further with Craft Club directly.’

Nakisah told Pedestrian TV that small businesses are ‘vulnerable to big business taking advantage’, while it’s difficult for them to spend $1,500 (£840) on a single design copyright in Australia.

Nakisah added: ‘Collaborations and stocking the work of independent businesses is a fantastic way for a large company to create new products in an ethical and positive way.

‘A company like Cotton On might not stock products, but doing a collaboration with a small business/artist is an amazing way to boost both brands and show that they actually do want to make a ‘positive impact’. ‘