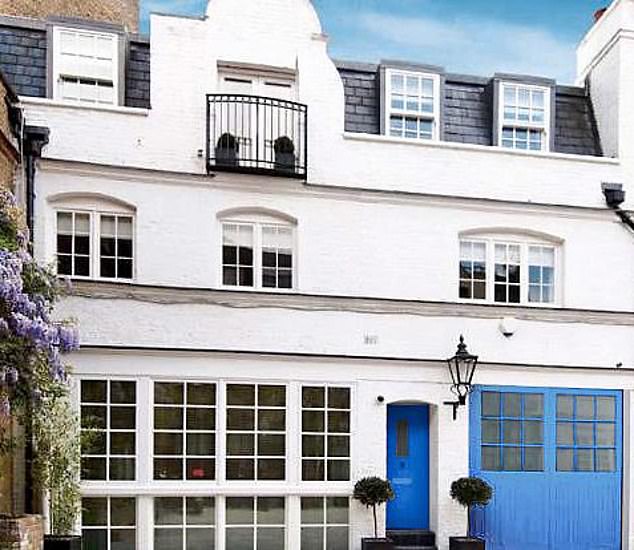 Revealed: The Sunaks move to a £6.6million bolthole away from No 10 – and it’s the most expensive house on a sought-after London street

By Charlotte Griffiths for The Mail on Sunday

He may be the only Minister rich enough to trade up from a flat above No 10 Downing Street, but Rishi Sunak and his family have moved to another sought-after address.

The Chancellor and his wife Akshata Murty have taken up residence with their children in their £6.6 million mews house in Kensington – and it’s the most expensive house on the west London street.

It is believed that Mr Sunak will remain at the flat above No 10 during the week and will join his wife and family in the mews mansion at the weekends.

House of Sunak: the Chancellor’s family has moved to the most expensive house on the street

Though the Chancellor is traditionally described as living at No 11 Downing Street, in fact Mr Sunak lives at No 10 and it is Boris Johnson and Carrie who live in the larger four-bedroom flat next door.

The Sunaks are thought to have decided to move to be closer to their daughter’s school but the timing was unfortunate when removal vans were seen leaving Downing Street just as the Chancellor was facing calls to step down over his wife claiming ‘non-dom’ status to avoid paying full UK tax.

She has since volunteered to pay UK tax on all her worldwide income, though she will keep her non-dom status which allows her to take advantage of India’s zero-rate inheritance tax on her family’s business empire.

Now she is happily ensconced in her four-bedroom, two-bathroom mews home, reportedly bought for cash in 2010 a year after their wedding in India.

The Sunaks also own a sprawling manor house in North Yorkshire and another first-floor London flat less than a mile from the mews mansion, which they use as a holiday home for visiting relatives.

They also keep a home in Santa Monica, California.

A description of the mews on an architect’s website describes it as having a basement conversion and plenty of natural light thanks to a full-height window and rear light well. An extravagant staircase made of glass is a central feature.

Mrs Sunak is the daughter of the so-called ‘Bill Gates of India’, N. R. Narayana Murthy.

She has a 0.91 per cent stake in his tech empire Infosys, which puts her estimated net worth above the Queen’s.