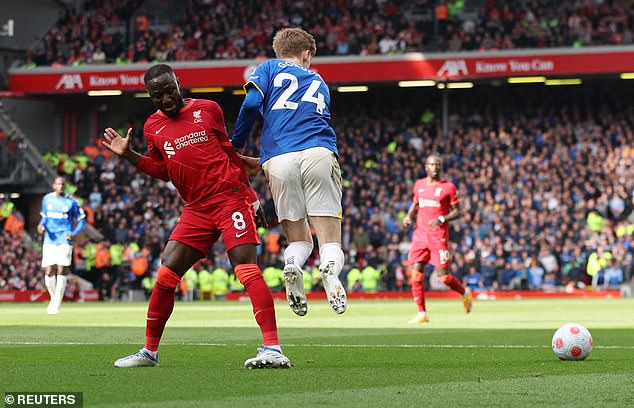 There have been 12 yellow cards issued for diving in the Premier League this season and Everton have been responsible for half of them.

Anthony Gordon was the latest to be punished during Everton’s 2-0 defeat by Liverpool at Anfield on Sunday.

Second-half goals from Andrew Robertson and Divock Origi left Frank Lampard’s side in the relegation zone with six games left to go.

Gordon’s booking also happened to be the third time that an Everton player has been booked for simulation against Liverpool this campaign.

In the 4-1 loss to their Merseyside rivals at Goodison Park in December, both Andros Townsend and Demarai Gray also went into the referee’s book.

Other players from the Toffees who have been booked for going down too easily this season include Richarlison, Allan and Lewis Dobbin.

No other club in the top flight has seen more than one player booked for diving this season.

Arsenal star Bukayo Saka was the last player in the Premier League to be shown a yellow for simulation in their 2-1 defeat to Brighton earlier this month.

Against Liverpool, it was judged that Gordon went down too easily while skipping past Naby Keita to try and win a penalty.

Later in the game, Gordon went down in the box again following a challenge by defender Joel Matip.

With the score level at 0-0, Everton believed that the Liverpool defender bundled over their player inside the area.

Kevin Campbell said he felt the referee ‘bottled’ a decision to give his former side Everton a penalty.

The pundit said on Sky Sports: ‘This is a pen for me. It’s a push in the back.

Players to be booked for diving this season

‘He’s in the box, it’s a push in the back. He’s nowhere near the ball, he pushes him.

‘If that was at the other end, I’m sure this stadium would have gone crazy.

‘That’s the one break that Everton needed,’ he added.

‘I thought the referee bottled it a little bit, if I’m honest with you.’

Jamie Carragher warned Gordon to ‘be careful’ in the future and not garner himself a reputation as a cheat in the game.

‘He’s got to be careful, Anthony Gordon,’ he said.

‘He’s a great lad and a great player, one of the best players on the pitch today, caused Liverpool massive problems.’

‘But he’s just got to be careful of that, it’s not the first time, the one in the first half, and it definitely will be in referee’s heads,’ he added.

Graeme Souness, on punditry duty alongside Campbell and Carragher, said Gordon’s first-half dive had ‘planted a seed’ of doubt in the referee’s head and could have counted against the player later on.

Souness said: ‘He’s planted a seed in the referee’s head, in the very first few minutes when he dived to try and get a penalty.’