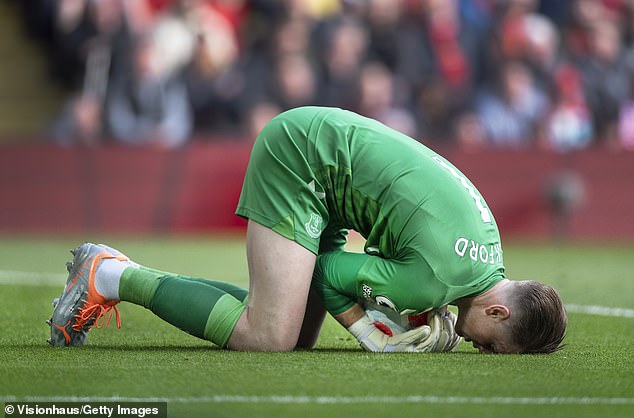 The Reds ultimately came out on top but were frustrated for two thirds of the game until Andy Robertson made the breakthrough.

Pickford drew the wrath of the home crowd as he slowly fell to the turf after claiming the ball in an effort to run down the clock.

In the closing stages of the game Liverpool stopper Alisson Becker proceeded to mimic him and draw cheers and laughter from his supporters.

When asked about Everton’s tactics, Klopp replied: ‘Yes, of course we expected it but we didn’t react extremely well.

‘It’s difficult, each ball Pickford has he takes five minutes so we couldn’t gain rhythm, which is important you want to break down a low block.

‘That’s what we expected them to do it, we just should’ve coped better with it.

‘The amount of wins we’ve had in recent months is insane. You have to work. The boys did that again. I’m really happy.

‘We stayed really cool and calm. The changes helped, Fresh players, different formation. It made it difficult for the opposition.