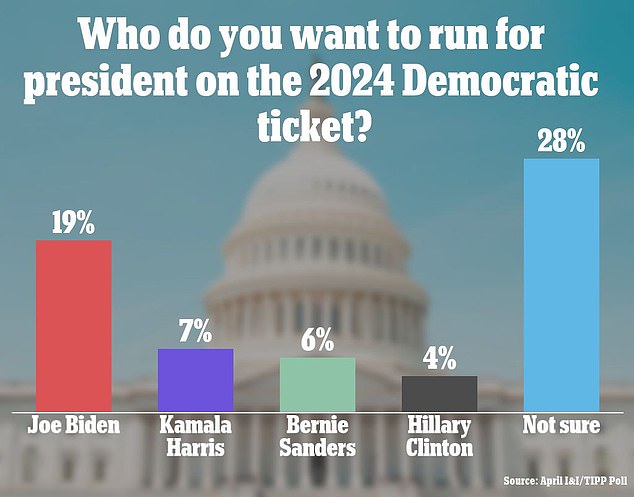 ‘Not sure’ option beats Biden AND Kamala in who voters would want to see as the Democrat to run for President in 2024, another dire poll finds

When given the choice, voters are more likely to be unsure of which Democrat they want running in the 2024 presidential race than they are to desire President Joe Biden or Vice President Kamala Harris to appear on the ticket.

The most popular answer among the 981 registered voters surveyed was ‘not sure’, while another 6 percent say they want a different candidate than some of the top presented in the poll question.

The dire poll for Biden and his No. 2 comes as they continue to show dismal approval ratings.

Biden sits around an average of 40 percent approval recently, some dipping into the high 30s.

Biden went from 59 percent approval among 18-to-29-year-olds last spring to just 41 percent in the poll taken March 15-20 among 2,024 people in this age demographic.

‘An interesting observation, just FYI,’ Klain wrote on Twitter Sunday. ‘President Macron appears to have secured a double-digit victory over LePen, at a time when his approval rating is 36%. Hmmm….’

Accompanying the tweet was a Morning Consult weekly tracking poll of several major world leaders’ favorability within their own countries. It showed Biden with a 40 percent approval rating among American adults, four points better than Macron and eight above British Prime Minister Boris Johnson, who ranks lowest on the list at 32 percent support.

The link was an apparent indirect response to criticism that Biden shouldn’t run for reelection considering his low approval.

Macron is the first French president to win reelection in 20 years, defeating far-right nationalist opponent Marine Le Pen by roughly 58 percent of the vote to 42.

The I&I/TIPP poll shows former first lady Michelle Obama, coming in with 6 percent support for a presidential run in 2024, to be a more popular option than several of the politicians, including former Secretary of State Hillary Clinton, Transportation Secretary Pette Buttigeig and a slew of candidates who ran against Bidne in 2020 for the nomination.

When broken down by party, Democrats were predictably more likely to want to see Biden run again – even though it was still only 29 percent of respondents on the left who felt that way. Just 12 percent of Democrats wanted Harris to run as No. 1 on the ticket in 2024.

In the category of Biden’s own party, 12 percent of respondents still said they are ‘not sure’ who they want to see on the next presidential ballot.

The online poll was conducted April 4-6 and has a margin of error of plus or minus 3.2 percentage points.