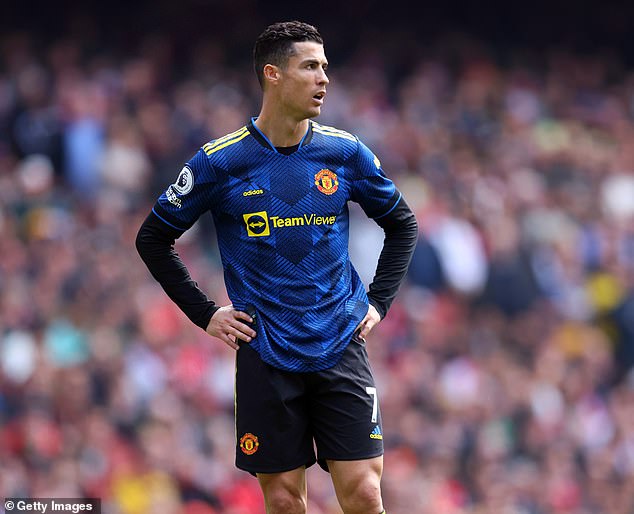 Piers Morgan reveals he’s spoken to Cristiano Ronaldo about moving to ARSENAL, if he’s not going to stay at Manchester United… where his team-mates ‘don’t respect’ the iconic star

Piers Morgan has spoken to Cristiano Ronaldo personally about leaving Manchester United to join to Arsenal during the summer transfer window.

Morgan thought Ronaldo was ‘the best player on the pitch’ during Manchester United’s defeat to Arsenal on the weekend and said he would sign the ‘world-class striker’ in a ‘heartbeat’.

Morgan worries that Ronaldo is not given the right respect he deserves in the United dressing room. He says the club’s youngsters need to check their ‘egos’ and admits they should be ‘begging Ronaldo for advice’.

“I had this conversation with him last week. I’d take him in a heartbeat.” ❤️

Speaking to TalkSPORT Breakfast on Monday morning, Morgan said: ‘When it comes down to money and owners and riches and banking, we’ve got the richest of all of them.

‘Stan Kroenke has got £10billion, he’s married to a woman who has got even more in the Walmart heiress who has £15billion. He’s just bought a ranch for £750million, he can afford to buy a couple of strikers!

‘Do you know what I’d do if I was Arsenal manager? I’d go in, get Cristiano Ronaldo and put him up front. I’ve had this conversation with him last week. I said ‘come to Arsenal’.

‘The mental attitude is shocking. Whatever is going on in that club…if they didn’t have Ronaldo in the team they wouldn’t be winning, whereas Arsenal have young, hungry, really promising guys who have a great attitude. People like [Bukayo] Saka, [Emile] Smith Rowe, [Kieran] Tierney and all of these guys.

‘That’s what’s encouraging. If you combined the United talent with our mentality then both clubs would be sorted.

Therefore, he says the Arsenal hierarchy should be doing everything they can to sign him

‘I’m not even joking. I’d love to bring Cristiano Ronaldo to Arsenal. If he’s not going to stay at United, I’d take him in a heartbeat. I watched that game at the weekend and he was the best player on the pitch.

‘As a striker, when you watch Ronaldo’s movement and his goalscoring record at 37, I’d put Ronaldo at the front and let these kids learn from him.’

Morgan went on to say: ‘There’s a brilliant story from Saturday. I walked into this box and there is Dennis Bergkamp, my all-time Arsenal hero.

‘I was telling Dennis about how Thierry Henry always gets annoyed when I say that Dennis is my number one, when there’s a tap on my shoulder and it’s Thierry!

‘I found myself doing a picture with the two of them, then I went down and saw that Arsenal released some footage of them talking to Smith Rowe and Saka and you could see the awe in those young guys’ faces.

‘I don’t feel like there’s that respect from those young guys at United for Ronaldo. I think that the egos are writing cheques that the lack of trophies doesn’t cash, and my message to those young United stars is that you’re talented, but your egos are out of control and you should be begging Ronaldo for advice.

‘If you had even a tenth of his work ethic, his ability, his success and his trophies all around the world then you’d be much better than you are now, but there’s an arrogance there about those players which we don’t have at Arsenal.

‘That’s not the problem. Bring in a couple of world-class players and then I might start to believe in the process.’