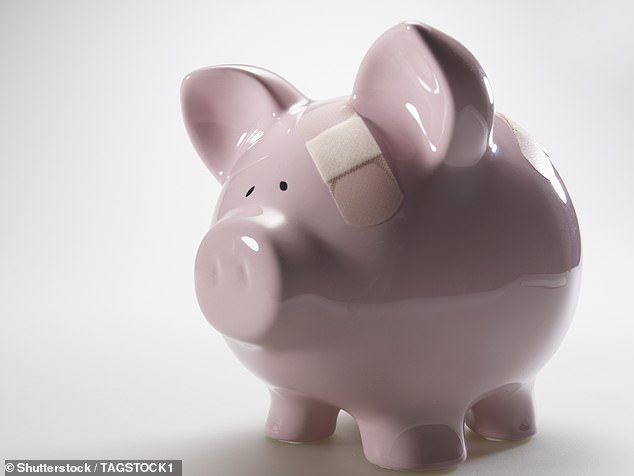 Savers could earn up to 33 times more interest by ditching their high street savings account and switching to one of the top deals, new analysis reveals.

Savers have billions of pounds languishing in high street accounts earning just 0.02 per cent in annual interest on average.

Millions believe that with rates so low, it barely pays to shop around for a better deal.

Under the weather: Millions believe that with rates so low, it barely pays to shop around for a better deal

However, the gap between the average high street account and the top-paying accounts has been widening in recent months.

Some providers have been passing on recent Bank of England base rate rises to customers, while others stubbornly keep rates at record lows.

The base rate rose to 0.75 per cent last month and is likely to increase further as the Bank attempts to tame soaring inflation.

Similarly, the average one-year fixed-rate bond is now 0.21 per cent on the high street, but considerably higher at 1.42 per cent among the top ten best paying accounts.

Samantha Booysen, at savings provider Investec which commissioned the research, says: ‘Many savers have remained loyal to the same high street provider for many years, which helps explain why they have traditionally accounted for around 60 per cent of UK household deposits. But their loyalty doesn’t mean they have a best buy rate on their savings balance.’

Some of the best rates are offered on regular saver accounts, into which you can deposit a maximum sum each month.

From Thursday, First Direct customers will be able to pay up to £300 a month into its Regular Saver account and earn 3.5 per cent annual interest.