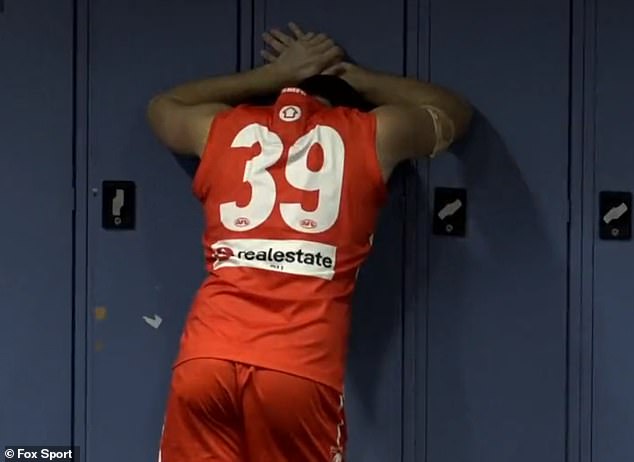 Swans defender Paddy McCartin appeared distraught in the Sydney dressing rooms after being subbed off with a bad head knock in his side’s win over Hawthorn and failing a concussion test.

The 26-year-old mounted a fairytale comeback after suffering eight concussions with St Kilda from 2015 to 2019, leading to fears he might have to quit the game for good.

A former No.1 draft pic, McCartin reinvented himself as a defender and got the chance to play alongside his brother Tom with the Bloods.

He copped an accidental knee to the head from Hawk Chad Wingard in the third quarter in Launceston on Monday and was pulled from the field for a concussion test.

After copping eight concussions from 2015 to 2019 while with St Kilda, it’s no wonder Paddy McCartin looked distraught in the Swans sheds after yet another bad head knock

The former No.1 draft pick stayed down after copping an accidental knee from Hawk Chad Wingard in the third quarter

When he failed it he could be seen in the dressing rooms looking distraught and saying, ‘For f***’s sake!’ before putting his arms up against a locker and hanging his head in dismay.

But there was some good news after the game, with Swans coach John Longmire revealing McCartin was ‘feeling really good’ despite the heavy blow.

‘The docs are ultra-conservative with him, as you can understand,’ Longmire said.

‘He wanted to come back on, but you can understand we weren’t going to put him back on afterwards, even though he felt good.

McMartin was also hit heavily as he backed into a pack earlier in the game, but emerged from the collision with no ill effects

McCartin felt fine after he came off and wanted to return to the field, but the Swans were ultra-conservative with him given his awful history with blows to the head

‘He said he was fine, he feels good now.’

Commentators voiced their concerns for McCartin in the immediate aftermath of the head knock.

‘It has a way of ripping your heart out, this game.’

Hawks legend Dermott Brereton said, ‘Fingers crossed for Paddy. He can’t take any chances and he’s just thoroughly disappointed not to be out there, that’s what I’m wishing for.’

McCartin was de-listed by the Saints after his shocking run with concussion but has been making his mark with the Swans this season, doing a good job of defending the opposition’s taller players and averaging nine marks per game – a career best.