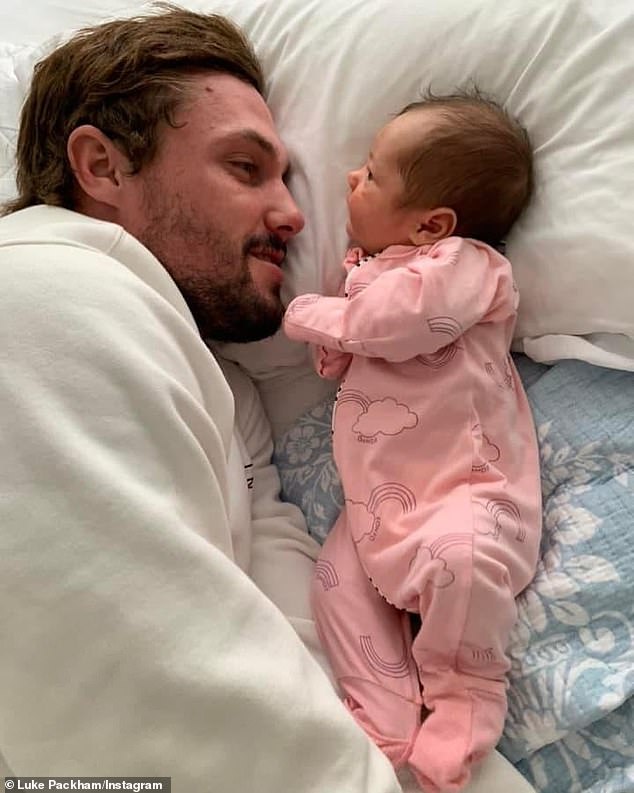 And on Monday, The Block star took to Instagram to share a sweet photo alongside his adorable newborn daughter as they celebrated a milestone.

‘One month loving you, my gorgeous girl ❤️’ he captioned the post.

So sweet! The Block’s Luke Packham shared a a new photo posing alongside his adorable newborn daughter Mia while celebrating a milestone moment on Monday

Luke and his lawyer partner announced the arrival of their first child on March 29.

At the time, he shared a photo of the newborn clasping his finger, writing: ‘Our little Mia Jessica Packham was born yesterday!’

‘She is healthy and doing great. We love her so very much! I will be uploading some photos of her in the near future,’ he continued.

Baby joy! Luke and his lawyer partner announced the arrival of their first child on March 29

Alongside a photo of the newborn clasping his finger, he old wrote: ‘Our little Mia Jessica Packham was born yesterday!’

The couple revealed last year that they were expecting their first child together.

‘It wasn’t planned but we always said, “If it happens, it happens”, and that’s how we’ve approached the situation, but we were both stoked when we found out,’ the Love Island Australia star gushed to Woman’s Day magazine.

Luke and Olivia became engaged in October last year, and were originally planning to tie the knot in late 2021.

Getting married: Luke announced his engagement to Olivia last year in October, sharing this sweet photo of himself and his new fiancée

Luke announced his engagement to Olivia during a diving expedition in Byron Bay last year, sharing the news on Instagram with a heartfelt post.

‘Took this girl diving today and popped the question at the bottom of the ocean! Was a moment I will remember forever,’ he wrote next to a photo of the couple embracing on a boat.

Olivia proudly showed off her new diamond ring, while also holding a laminated piece of paper that read: ‘OLIVIA JESSICA KISS you make me the happiest man. WILL YOU MARRY ME?’

New love: Luke revealed he was in a new relationship in December 2020, sharing this photo of himself kissing his new girlfriend on Instagram