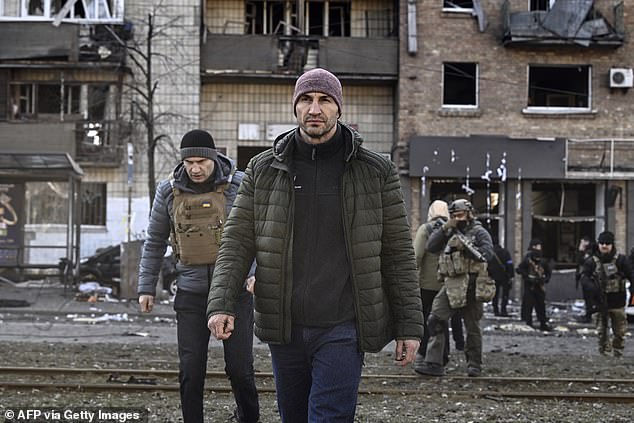 ‘If the war in Ukraine ends soon and I’m in good shape…’: Wladimir Klitschko, 46, suggests a sensational return to boxing, after watching Tyson Fury’s fight… but only once he’s done with Russia in Kyiv’s Territorial Defence

Wladimir Klitschko has suggested he could make a sensational return to professional boxing – but only when the war in Ukraine is over and there is no Russian threat.

The 46-year-old – who was a world champion at heavyweight level for 11 years – retired in August 2017 following his defeat against Anthony Joshua at Wembley earlier that year.

The Ukrainian has in the years since stayed away from the ring and after Russia invaded his homeland in February, he joined the Kyiv Territorial Defence in response to Vladimir Putin’s assault.

Yet in an interview with German outlet BILD following Tyson Fury’s victory over Dillian Whyte on Saturday night Klitschko – whose brother Vitali is also a former world champion and is now Mayor of Kyiv – says he has not ruled out donning his gloves once again.

‘I also learned that despite the war, you shouldn’t forget life. Sport is part of my life. I’m delighted that Tyson Fury won,’ he said.

‘Who knows, I don’t want to promise anything big here, but if I’m in good shape and, above all, that the war in Ukraine will soon come to an end, and that our Borders exist without any invasion coming from Russia, then in the end who knows?’

Klitschko added he could embark on his ‘dream’ of breaking George Foreman’s record of being the oldest world heavyweight champion in history.

‘If I’m in good shape, who knows, maybe I’ll have this dream of breaking George Foreman’s record,’ he added.

‘That motivates me to get up every day and do sports. Everyone has their own motivation.

‘I don’t want to break a jaw, I want to break a record. I said that before the war. And during the war it’s about peace in Ukraine and when peace comes, we’ll talk about it again.’

Foreman became world champion again in November 1994 at the age of 45 after beating Michael Moorer, 18 years his junior.

Klitschko’s 11-year reign as world champion was ended by Fury in November 2015 when The Gypsy King shocked the world to beat ‘Dr Steelhammer’ by a unanimous points decision in Germany.

A rematch between the pair failed to materialise as Fury struggled with mental health problems, and Klitschko hung up his gloves after a memorable back-and-forth showdown against Joshua in London.

Klitschko, alongside his brother Vitali, has been outspoken on news networks across the world about the war in Ukraine, and only last week called for ‘increased international pressure on Putin’s regime.’

Fury, meanwhile, says he will retire after Saturday’s victory: ‘I have to be a man of my word. I think this is it.

‘This might be the final curtain for the Gypsy King. What a way to go out… I’ve fulfilled everything I’ve wanted to achieve, I’m going to retire as only the second heavyweight champion after Rocky Marciano to retire undefeated.’

Fury, who hinted at future exhibition fights and even a switch to Mixed Martial Arts and WWE, added: ‘I promised my lovely wife Paris of 14 years that after the (Deontay) Wilder third fight, that would be it. And I meant it. We had a war. It was a great trilogy.