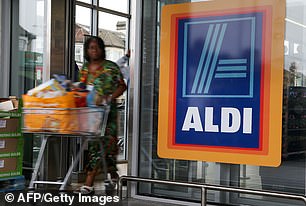 Aldi and Lidl combined now do more business in the UK than any other supermarket apart from Tesco.

The discounters saw their market shares hit record highs after sales rose by 4.2 per cent for Aldi and 4 per cent for Lidl in the three months to April 17. The pair make up 15.4 per cent of the market compared with 5.5 per cent a decade ago.

That put them ahead of second placed Sainsbury’s, which has a 15 per cent slice.

Tesco, which controls 27.3 per cent of the market, was the only other major grocer alongside Aldi and Lidl to pick up share, according to figures from data and consultancy group Kantar.

The Kantar figures showed food prices were 5.9 per cent higher than a year earlier – the biggest increase since 2011.

Kantar said food inflation could cost households £271 each per year. The squeeze heightened the focus on low-cost and own brand products.