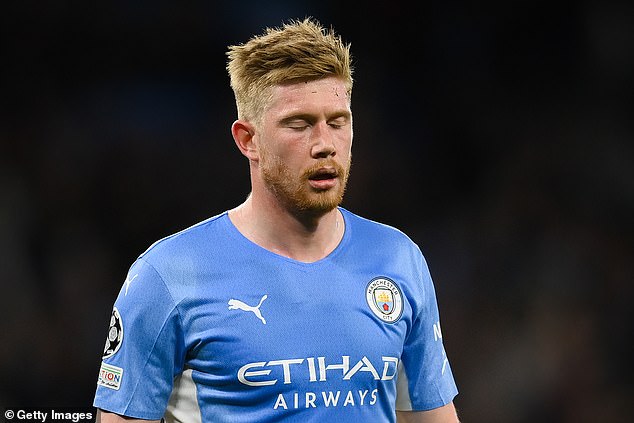 ‘They’ve given Madrid slim hope’: Man City are slammed for being ‘NAIVE’ by Steve McManaman after they let Real off the hook in their Champions League semi-final victory, as he takes aim over failure to ‘manage’ the game

Manchester City have been accused of being ‘naïve’ in their Champions League victory over Real Madrid, after their opponents kept themselves alive in the semi-final tie following the thrilling action at the Etihad.

City were able to place one foot in the final of the competition after sealing a full-throttle 4-3 victory, but they squandered a commanding lead on three occasions despite carving out a number of golden chances.

And in his analysis of the game at full-time, BT Sport pundit Steve McManaman insisted that Pep Guardiola’s side were sloppy in handing Madrid a glimmer of hope.

Kevin De Bruyne and Gabriel Jesus netted inside the early stages of the clash, only for Karim Benzema to halve the deficit after he met Ferland Mendy’s inviting cross.

Phil Foden then nodded beyond Thibaut Courtois to restore City’s two-goal cushion, before Vinicius Junior burst down the other end minutes later to slot in with aplomb.

There was still time for Bernardo Silva and Benzema to exchange strikes, the latter pulling off an audacious panenka from the penalty spot to round off the scoring.

Kevin De Bruyne netted the opening goal, with City going on to claim a first-leg advantage

‘You never accuse City of being naïve, but they were at times today,’ McManaman said. ‘When they were two-nil up, and three-one up and four-two up, they shouldn’t have let Real Madrid back into the game.

‘I don’t know what it was, whether they were overly confident because they were so far ahead. As soon as they went two-nil up, they dropped deep.

‘You think to yourself, “how has this happened?” City should have been controlling the game. I still think City will score goals and probably win the game over there, but they’ve given Madrid slim hope.’

McManaman, the former Liverpool forward, also vented his frustration at the home side’s failure to ‘manage’ the game despite their healthy scoreline advantage.

Karim Benzema netted twice for Madrid, meaning they still have a chance of making the final

‘We’ve all experienced games where you think it’s easy, but then something happens,’ he added. ‘You can feel the shift changing. Then it’s backs to the walls and you’re wondering, “how did this happen?”

‘That didn’t happen today once, it happened three times. Two-nil, three-one and four-two. I don’t know why City started dropping off and allowing Madrid to come back onto them.

‘Whenever they went forward they dominated so much and made so many chances. You’re thinking to yourself, don’t make a mistake and manage the game.’

Madrid were similarly criticised by the same pundit for being similarly naive.

Bernardo Silva was also on target in the thriller, but Madrid hit back ahead of the return leg

‘It happened with Real Madrid as well, they showed they were naïve even though they’re the most experienced team around,’ McManaman said.

‘Whenever they got to a goal, Manchester City went back down the other end and scored and made chances again.’

The return leg will take place on Wednesday, 4 May at the Bernabeu.