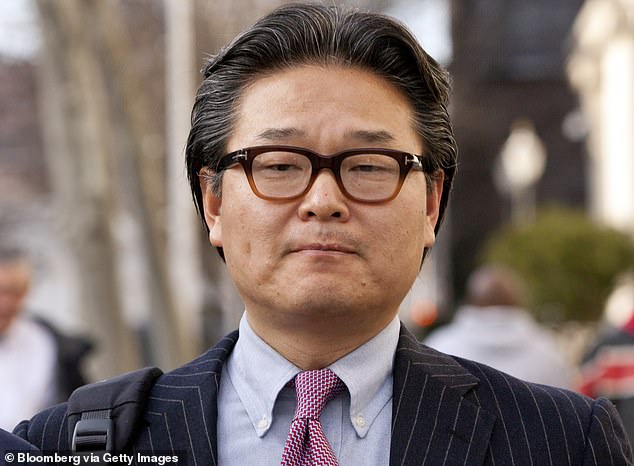 The duo at the top of imploded hedge fund Archegos Capital Management have been arrested and charged with fraud.

Bill Hwang and his right-hand man Patrick Halligan were accused by US prosecutors of using the firm as an ‘instrument of market manipulation and fraud’.

Archegos, a previously little-known family office managing the vast wealth of financier Hwang, fell into the spotlight last year after its spectacular collapse caused some of the world’s biggest banks to lose billions of pounds.

Arrest: Bill Hwang (pictured) and his right-hand man Patrick Halligan were accused of using the Archegos hedge fund as an ‘instrument of market manipulation and fraud’

This allowed the firm to take bigger bets on various stocks than it might otherwise have been able to afford. But when the bets turned sour in a drastic way in March 2021, Hwang had no money left with which to repay the lenders.

The crisis sent ripples across financial markets, as stocks which Hwang was invested in tumbled.

Now Hwang, 57, and Halligan, 45, have been arrested in the US and are expected to appear in Manhattan federal court.

Prosecutors allege that senior executives at Archegos artificially inflated the size of their investment portfolio from around £1.2billion to £28billion – and at one point to £128billion – using deceptive trading tactics. Lawyers for Hwang and Halligan said their clients are innocent.