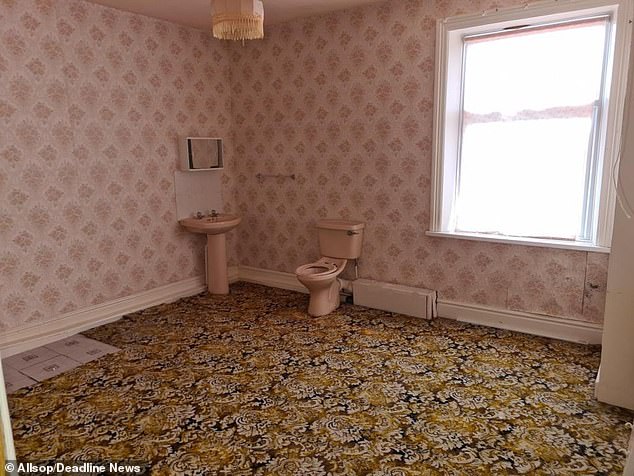 Worth a loo-k around! Homebuyers are left baffled by VERY spacious 14ft wide bathroom in a £30,000 one-bedroom house – and joke the toilet comes with a ‘nice bit of legroom’

Homebuyers have been left baffled by a one-bedroom house with an unusually large bathroom.

Photos of the dusky pink bathroom suite show the sink and toilet in one corner, with the shower stall at least 10ft away.

Potential buyers have taken to social media to admit that they were left stunned by the layout of the bathroom.

Homebuyers have been left baffled by a one-bedroom house with an unusually large bathroom. The 1,100 sq ft terraced property in Barnoldswick, Lancashire, which has been put up for auction with a guide price of £30,000, has a 14ft x 13ft bathroom, pictured

The terraced property in Barnoldswick, Lancashire, has a dusky pink bathroom suite, with a sink, toilet and shower that look swamped by the space

‘Nice bit of legroom when you poop,’ another wrote.

A third commented: ‘Could turn into a lovely en-suite.’

However others thought it was worth it for the price, with one adding: ‘F*** me, for thirty large I’d have it.’

Other photos of the dated property show the lounge has wooden storage units and small light fixtures.

The property also includes a dining room, small kitchen, double bedroom and an attic which has the potential to be turned into another room.

According to Right Move the average price of a UK house is £360,101, however Auctioneers Allsop listed the property last week with a guide price of £30,000.

Marketing the house, the auctioneers wrote: ‘Located on the north east side of York Street to the south east of its junction with Back Chapel street.

‘The shops and amenities of Barnoldswick Town Square are to the north and Colne Rail station is approximately 5.7 miles to the south.

The house, which is available for virtual tours, is set to go under the hammer on 12 May.

The house has a small dated kitchen (pictured) that features an oven, fridge and white cupboards

Social media users have said they would purchase the house for £30,000, however the bathroom has left them speechless