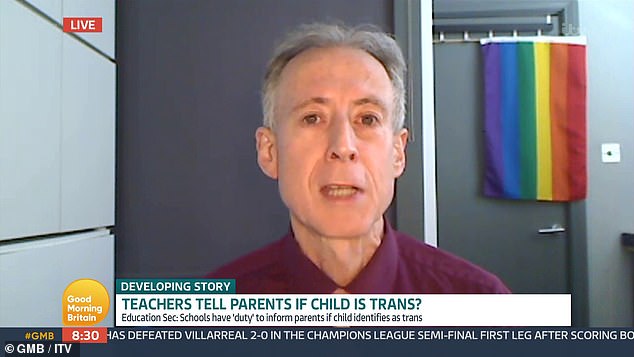 A human rights campaigner has divided opinion after claiming teachers should not tell parents if their children disclose to them they’re transgender.

Last week Education Secretary Nadhim Zahawi claimed schools ‘have a duty to safeguard’ children by informing their parents if they disclose to a teacher they are transgender.

Debbie claimed that while personal information should always be disclosed in a controlled and respectful way, teachers should not ‘keep secrets’ from their student’s parents.

However Peter said children have the same right to privacy as adults and that telling parents they are transgender could put kids at risk of ’emotional and psychological bullying’.

human rights campaigner Peter Tatchell, 70, believes that children have the same right to privacy as adults and that sharing personal information will lead to a breakdown of trust between pupils and teachers

He said: ‘The number one priority is what is in the interest and the welfare of the child,  that must come first.

‘Having said that children do have a right to privacy like everyone else and if we have a situation where teachers are spies and snitches then it will break down trust. Pupils won’t feel confident divulging things to teachers.’

The campaigner said that divulging a child is transgender could put them at risk from parents who may pressure them into changing their gender identity.

Viewers were divided over the issue – with several claiming parents should be informed so they can support their children, will others felt a child should be able to come out when they are ready

‘Obviously it would be ideal for parents to be informed but teachers should consult with the child, what the child wants. [Consider] would it be safe to tell the parents, if the child is happy about it maybe the best thing is the child should be present when the issue is discussed with the teacher. That is probably the best approach but no approach is perfect.

‘That is the way we operate with everything else, that is standard practice across the school. If a child discloses something to you, my basic training as a teacher is to make sure the child is honest with the parent before reporting it within the school using the normal procedures.’

She explained that teachers shouldn’t tell parents about personal issues in an uncontrolled way, for example over the phone, but that they should be informed so ‘parents and schools can work together to support the child’.

However Peter believes that children have the same right to privacy as adults and that sharing personal information will lead to a breakdown of trust between pupils and teachers.

Transgender teacher and activist Debbie Hayton, 54, appeared on Good Morning Britain where she claimed schools have a ‘responsibility’ to tell parents if a child reveals they are transgender

Viewers were divided over the issue – with several claiming parents should be informed so they can support their children, will others felt a child should be able to come out when they are ready.

‘Of course parents should be informed if a child tells a teacher they believe they’re trans or non binary’, wrote one viewer.

‘Unless the family has a history of child protection issues this is far too important to keep from parents!’

Another agreed: ‘Of course teachers should tell parents if their child thinks they’re trans. Children need support and counselling, teachers should gate keep not secret keep’.

Meanwhile, others disagreed with one writing: ‘It’s not their duty at all it causes is troubles for the trans pupil with other pupils who parents have a different outlook on trans people. teachers shouldn’t inform anyone their job is to protect.’

‘Seems like a lot of people think they know better than the parents of trans children, even though they seem to say they are glad their child was able to come out to them when THEY were ready, not when a teacher did it for them #gmb’, said another viewer.