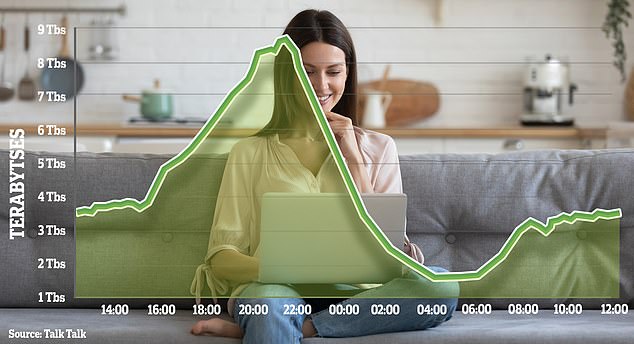 A peak record of 8.715Tbps, the equivalent to downloading 363 hours of HD video per second, was set on TalkTalk’s network last night at 9.20pm, overtaking the previous record of 8.345Tbps set in December 2021.

‘It’s a reminder of the ever-growing demand for great Wi-Fi and full fibre broadband.’

What were you watching? TalkTalk enjoyed a record spike in internet usage last night at about 9.20pm

TalkTalk said streaming and online gaming had surged on its network in the last two years, prompting a hefty 40 per cent spike in internet usage.

This increase is spread across TalkTalk’s customer base, with broadband usage among over 65s up by 23 per cent this year.

Previous research from TalkTalk showed that 41 per cent of people said they were streaming more content than they were before the pandemic, while one in ten had taken up online gaming.

Along with TalkTalk, other internet service providers experienced a marked surge in traffic and internet usage last night.

Aggregated traffic data from the London Internet Exchange, which it should be noted does not cover every internet service provider, suggests total traffic hit a peak of around 6.95Tbps just before 8.30pm, which is considerably higher than the peaks seen over the last few days.

TalkTalk will be using sophisticated Content Delivery Networks and systems to help manage surges in traffic, which caches popular content closer in the network to end-users.

It said: ‘During the evening peak period between 8-10pm, traffic was up 11.9 per cent on average and up 23.8 per cent on the previous week, as gamers rushed to download the latest update which went live on Wednesday.

‘Over the course of the evening (4pm-12am), the average Virgin Media user consumed 12.1GB of data, up nearly a third (29 per cent) on the previous week.’

Jeanie York, chief technology officer at Virgin Media O2, said: ‘With Triple-A games studios continuing to issue huge updates, and customers racing to get their hands on the latest releases, the growth in network traffic we saw during lockdown is here to stay: 2022 is set to be another record-breaking year for data usage.’

Get the best broadband deal: Five tips for switching and saving

1. Be realistic on price: A Uswitch spokesperson says: ‘Most contracts last for 12, 18 or 24 months, so budget wisely to ensure you can afford the desired package for the entire term.’

2. Get the speed right: Uswitch says: ‘You could end up overpaying for a package that doesn’t suit your current usage. Run a speed test to see how fast your current connection is. If you’re happy with the performance, then consider whether a faster, and potentially more expensive deal, is worth it.’

3. Assess how long you want the contract for: Uswitch says: ‘Two years is a long time, so be confident that you’ll see out the package until the end of the term. If you plan to move house in a year or 18 months, consider a package that fits with your schedule.’

4. Don’t be swayed by perks. Uswitch says: ‘Some packages come with additional benefits such as gift cards or vouchers, so if you’re an avid shopper then these could be a great perk. Be mindful that you don’t get swayed into a contract solely based on added extras though, as you need to ensure the overall price, speed and length of contract is suitable for you.’

5. Compare deals: Comparison websites like Uswitch, Comparethemarket, and Moneysupermarket, for example, offer a wide range of deals that you can compare and tailor to your requirements.

Uswitch adds: ‘There’s often exclusive deals to be had through comparison sites too, so keep an eye out for limited time offers.’