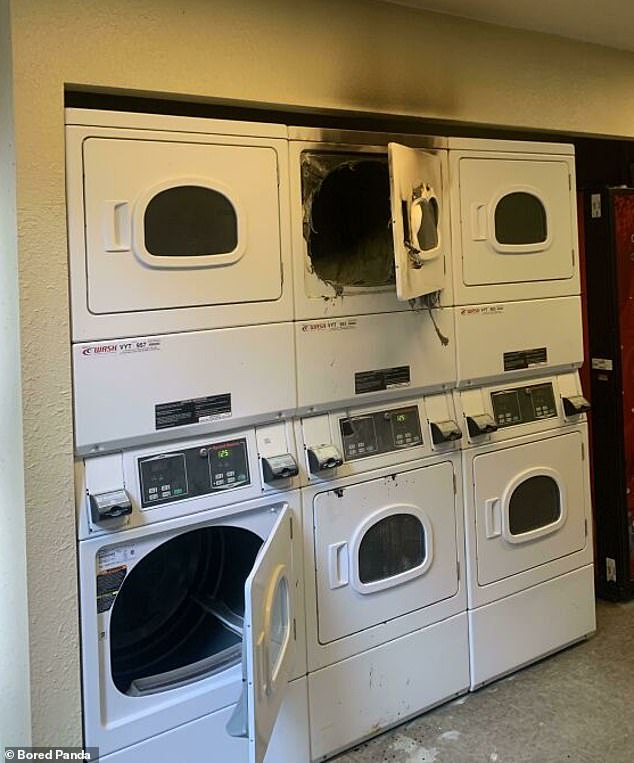 Thought YOU were having a bad day? Hilarious photos show people who are definitely having worse luck – from a homeowner whose ceiling caved in to a man whose washing machine caught fire

Knowing that someone else is having a bad day doesn’t necessarily make you feel any better when luck isn’t on your side, but these images will be a good distraction from your problems.

People from around the world have taken to social media to share photos taken on their worst day, with the most shocking examples have been rounded up for an amusing gallery on Bored Panda.

Among the snaps was one person who had to go clothes shopping after their items set on fire in the tumble dryer at their local laundrette.

Elsewhere there was a pet owner who returned home to discover their puppy had been chewing their passport.

Bored Panda has rounded up a selection of photos from around the world that show people having a worse day than you – including one person, believed to be in the US, whose clothes caught on fire in a tumble dryer

Eye of the storm! One homeowner, in an unknown location, was left speechless after seeing the damage done to their kitchen with items hanging from the wall and a fallen ceiling

Another person, who lives in the US, came home to discover their puppy had been chewing their passport

Going nowhere fast! One car owner claimed they had just pulled into their campsite 450 miles away from home when disaster struck and their key snapped

Another individual, believed to be in the US, revealed their neighbour had their sports car for less than a month before it was ruined with spray paint by a scorned lover

One car owner, who lives in the US, was left devastated when a thief broke into their car and left them a note to complain that they had stolen $10 worth of candy and toys for children

The stuff of nightmares! One person claimed they were getting ready to go to bed when they walked into their room to discover part of their ceiling had collapsed

Another man, who lives in the US, said he had been using his air purifier for over a year before realising the filter had been covered in plastic