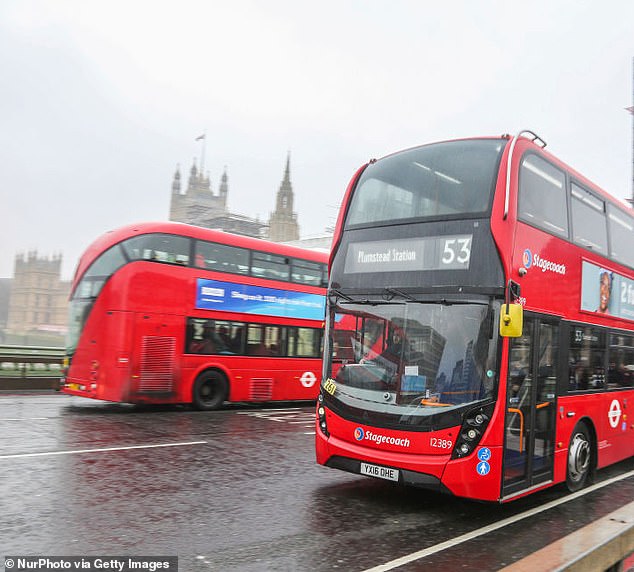 By Catrin Picton For Mailonline

London bus drivers are set to strike next month over pay disputes.

Arriva drivers and Unite members plan to walk out on May 11, 15 and 16 disrupting travel in the capital.

Over a thousand drivers from garages in Brixton, Croydon, Norwood and Thornton Heath that operate routes across south and central London are taking part, according to Unite.

The union said a 3% pay offer was ‘substandard’ as service reductions in the capital have reduced workers’ pay, coupled with the cost-of-living crisis which has made everyday items more unaffordable.

‘Arriva’s drivers are being pummeled by a double whammy of reduced earnings and rising living costs.

‘Arriva must think again and pay its drivers a fair wage.

‘Our members at Arriva will be receiving Unite’s complete support until this dispute is resolved and the bus drivers receive an offer which meets their expectations.’

Unite regional officer John Murphy added: ‘The bus strikes scheduled for May will undoubtedly cause disruption and delays across London but this dispute is a direct result of Arriva’s high-handed treatment of its drivers.

A Brixton bus driver said to WSW : ‘The current strike is for last year, but we are facing inflation now! The pay talks for 2022 should have started in April.

‘We are certainly not voting to go [on strike] for 3 percent. We are not okay with three percent. That’s far from the mark.

‘Unite’s asking for 3 percent, but we voted for 5 percent,’ the driver said.

Arriva London South which represents Croydon, Thornton Heath and Norwood has around 400 drivers whose votes to strike won easily, with 169 drivers voting ‘yes’ and 13 ‘no’.

A senior driver at Brixton said, ‘I voted to strike. That was for last year, but we’ve got different circumstances now. We are facing inflation now.

‘If they didn’t delay last year, we wouldn’t be having the strike this year, would we? Last year is gone. We are living now, and we need to change accordingly.

‘Everyone thinks this is an easy job. I’ve been doing this job for many years, and it’s gone right down. And the amount of pressure that they are putting on drivers now, and they don’t want to pay them? The starting rate at Arriva now is £12 or £11, or something.’

Bus drivers strike action comes after tube strikes in March almost brought the city to a standstill when the RMT – Rail, Maritime and Transport – union staged a 24-hour walkout of around 10,000 Underground staff.

Underground staff protested over fears of staff cuts and changes to work conditions and pension schemes as Tfl had to make cuts to recover from losses incurred during the pandemic.

People wait to get on buses at Liverpool Street station in central London during a strike by members of the Rail, Maritime and Transport union (pictured) Tube strike action on Tuesday March 1, 2022

‘Workers are balloting for industrial action as a last resort. Despite repeated calls to management there have been no guarantees on pensions or job cuts.

‘Strike action would inevitably cause severe disruption to public transport throughout London.’

‘Yet despite this, Unite is now taking further strike action which will affect passengers and communities who rely on bus services in London

‘We call on Unite to abandon these strikes and return to discussions to agree a way forward.’