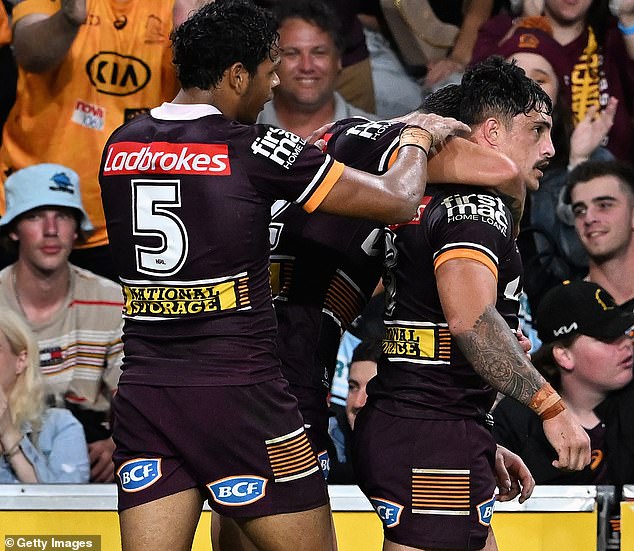 New South Wales coach Brad Fittler was full of praise for Kotoni Staggs after the Broncos centre emerged the clear-cut winner in his showdown for a State of Origin start with Cronulla’s Siosifa Talakai.

Staggs and Talakai crossed paths in a much-awaited showdown at Suncorp Stadium on Thursday night, when the Broncos upset the in-form Sharks 16-7.

With South Sydney star Latrell Mitchell set to miss out on the State of Origin series opener with a hamstring injury, both Staggs and Talakai have emerged as potential options to replace the Rabbitohs star at ANZ Stadium on June 8.

Blues coach Fittler was certainly impressed with he saw on Thursday night.

‘I thought it was fantastic,’ Fittler told Nine after the game of the contest between the two centres.

Ahead of the game Staggs said he give Talakai ‘a run for his money’ and kept his word, forcing a mistake from his counterpart with a big hit early on.

Staggs then made his presence felt at the other end of the ground, pinning his ears back to get on the outside of the Sharks star before unleashing a fend on Ronaldo Mulitalo to score in the corner.

The Broncos star put the icing on the cake late in the game, when he and teammate Selwyn Cobbo held up Talakai after the latter had burst over the tryline.

Fittler hailed Staggs’ try as an ‘incredible effort’ and was impressed with his defensive performance.

‘Kotoni, going out with a defensive mindset, but then being able to score that try at half time, tells you a lot about what he’s capable of,’ he continued.

‘Focus on defence but then still has the power to stand up Talakai and beat the winger to the corner […] that was an incredible effort.

Staggs finished with a try, six tackle busts, an offload and a line break along with his 113 metres from 13 carries against the Sharks

Staggs finished with a try, six tackle busts, an offload and a line break along with his 113 metres from 13 carries as he continued his superb recent form.

After a slow start, the 23-year-old has been one of of Brisbane’s players of the season so far, terrorising the Sydney Roosters defence in Round 5 and emerging with credit even from the shellacking the Broncos suffered against Penrith two weeks ago.

Talakai, meanwhile, racked up 143 metres on 15 runs a week on from clocking up an incredible 193 metres, nine tackle breaks, two tries and two try assists in the first half alone in the Sharks’ win over Manly.

Speaking on Fox League, former NRL great Greg Alexander and Warren Smith argued Staggs had come out on top from his personal duel with Talakai.

‘He’s taken the battle personally […] Staggs has been very good defensively all night on the man that has been all the chat this week in the NRL,’ said Alexander.

Smith added:  ‘He [Talakai] has been outplayed tonight by Staggs who has been fired up for a big one and has delivered.’