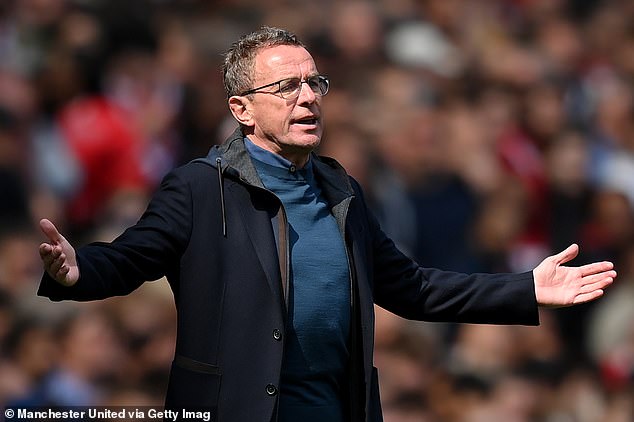 EXCLUSIVE: Ralf Rangnick is set to be confirmed as Austria’s new manager in the next 48 hours but he WILL continue in his consultancy role at Manchester United despite underwhelming spell as interim boss

By Chris Wheeler and Adrian Kajumba For The Daily Mail

Ralf Rangnick last night insisted that he will take up a two-year consultancy role at Manchester United at the end of the season even though he is set to be named as Austria’s new coach.

Rangnick’s appointment as Franco Foda’s successor could be confirmed by Austrian FA president Gerhard Milletich as early as today.

The 63-year-old still has three games left as United’s interim manager before handing over to new boss Erik ten Hag at the end of the season, and must win all three just to equal the club’s lowest ever Premier League points total.

Ralf Rangnick is set to become Austria’s new boss, but will take up his new Man United role

Despite an underwhelming spell in charge, United will still hand Rangnick a consultancy role until 2024 with an emphasis on recruitment that could involve working as few as six days a month.

The German confirmed that his agreement with United left room for another job but refused to discuss his imminent appointment as Austria boss. United also refused to comment on the situation last night.

‘I’d like to speak tonight about Manchester United and our games and the rest of the season,’ said Rangnick. ‘I can also confirm that I will definitely continue at the end of this season with my consultancy role.

‘I didn’t say I would have a big part moving forward, but we have definitely agreed now about both the content and time of my consultancy role.

‘It would leave space for another job but that was what we agreed to start with back in November last year.

‘So far we haven’t spoken Erik and myself. That will hopefully happen in the future. But as I said I’m more than happy and willing to help and change things for the better.’

However, former United captain Roy Keane will not be alone in feeling that a clean break may be in the best interests of all parties.

Despite there being just four games left, the details around his consultancy position are vague

‘It just adds to the confusion,’ Keane told Sky Sports.

‘He says consultancy, he’s not going to be at the club every day. If he takes the national job it’s a huge job in itself. So I think it would be difficult to do the two roles.

‘It’s been a difficult few months for him and I think if he goes upstairs people can almost tarnish his reputation because it’s been difficult, he’s not won enough games.

‘So I think a clean break for the new coach coming in might not be a bad thing.’