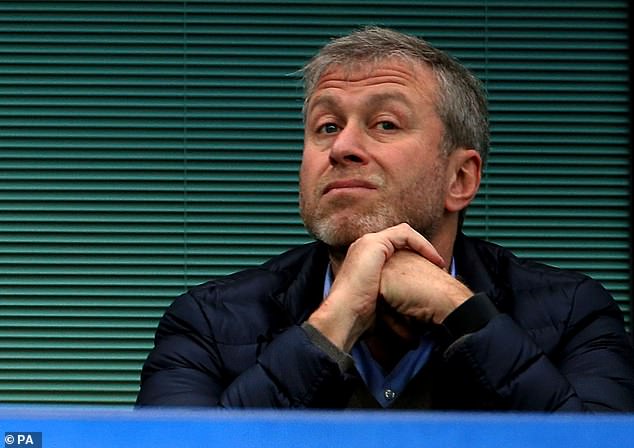 Roman Abramovich ‘demands an extra £500MILLION from Chelsea’s prospective new buyers as sanctioned owner wants to sell the club for £2.5bn – with £1bn of that donated to charity’

The ongoing tussle in finding a new owner for Chelsea has reportedly taken another twist with sanctioned owner Roman Abramovich demanding an additional £500million for the club.

According to Sky News, the trio of billionaire-studded consortia were informed in the last 48 hours of Abramovich’s request.

They state that the Russian wants this figure guaranteed to increase the pot that will be handed to charitable causes.

It is believed that this total will see the value of Chelsea reaching at least £2.5billion – with £1bn of that being donated to charities.

Abramovich, 55, was sanctioned last month on the back of his homeland Russia’s invasion of Ukraine in February.

Russian oligarchs have been targeted since the start of the war and Abramovich was a known ally of president Putin.

Abramovich had already lined up to sell the club following the invasion, and he still will be able to do so as long as he doesn’t financially benefit from the sale.

Chelsea must now operate under a stringent government licence, to ensure Abramovich does not profit from it.

As detailed by Sportsmail on Tuesday, the three remaining bidders for Chelsea have begun their final pitches, with the preferred bidder initially expected to be chosen this week – before Abramovich’s latest demands.

Still in the running to replace them are a consortium led by Sir Martin Broughton, the former Liverpool chairman, and another headed by LA Dodgers part-owner Todd Boehly.

Boehly’s consortium, it is claimed, met the Chelsea board at Stamford Bridge on Tuesday, with the other two bidders due to have made their final presentations on Wednesday.

There is hope Chelsea and the Raine Group, the New York bank overseeing the sale, will announce their preferred bidder by the end of the week.

Raine Group, the bank overseeing the Chelsea sale, could recommend their preferred bidder by the end of the week to the government

Last week, the bid fronted by Broughton was revealed to have £10million contributions each from Sir Lewis Hamilton and Serena Williams.

The sporting greats appear unlikely investors in a Premier League club, but Williams already has a stake in Angel City FC, the LA-based franchise who play in the National Women’s Soccer League.

The pair are also good friends, with Williams having attended several grands prix as Hamilton’s guest and the F1 driver spending much of his spare time on the west coast of America.

Broughton would become chairman of Chelsea if his bid is successful, but the bulk of the funding is being provided by the owners of the Philadelphia 76ers basketball team, Josh Harris and David Blitzer, who would have to sell their shares in Crystal Palace should they buy another club.

Pagliuca, the owner of NBA team Boston Celtics, is leading a rival bid to buy Chelsea and also owns a stake in Italian Serie A team Atalanta.

He has partnered up with Tanenbaum, who backs the Toronto Maple Leafs, and have committed to ‘lifetime ownership’ of Chelsea if their joint bid to buy the club is successful.