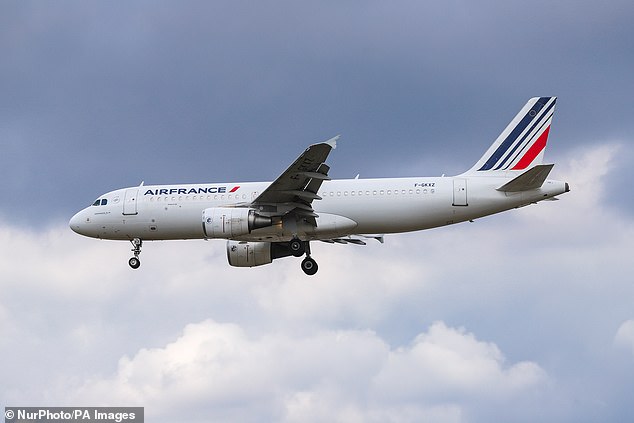 A Boeing 777 ‘went nuts’ while landing in France earlier this month when the pilots pulled their controls in opposite directions at the same time, investigators have said.

Air France flight AF011 from New York to Paris carrying 192 passengers and crew was around 1,000ft from the ground on its final approach to Charles de Gaulle airport when the pilots ran into trouble and had to abort the landing.

Investigators now say the issue was caused by the two pilots pulling their joysticks in opposite directions at the same time without realising, in what they deemed a ‘serious incident’ – industry jargon meaning it could have led to an accident.

A report by France’s BEA civil aviation authority released earlier this week said the plane had taken off from New York JFK around 1.16am on April 5 and had operated normally until coming into land around 7.50am.

While making its final approach, the co-pilot – who was in control at the time – appears to have accidentally tilted his controls to the left, causing the plane to turn.

The report says the plane was accurately following the direction of the control at this point, but it appears the co-pilot didn’t realise he was steering to the left because he ‘expressed astonishment with respect to the aeroplane’s [turn].’

Over the following seconds the turn became more-pronounced as the co-pilot pulled the control further to the left, which appears to have caused a moment of panic in the cockpit.

The decision was made to abort the landing and carry out a go-around, at which point both pilots grabbed their controls and made opposing movements.

While the co-pilot made ‘several, pronounced, nose-up’ movements – trying to get the plane back into the air – the pilot ‘held the controls slightly nose-down.’

This caused the control sticks to ‘desynchronize’ for around 14 seconds.

Boeing planes are fitted with two control sticks – one for the pilot and one for the co-pilot – which are connected by a central yoke, meaning they both move in the same direction at the same time.

However, there is an override mechanism which is activated when the two are pulled in different directions at the same time with a sufficient amount of force – which is designed to be used if one of the sticks gets jammed.

Flight control data released by French investigators shows how the plane descended before abandoning its landing (top) and how the pilots steered the aircraft in different directions (second from bottom, the diverging green and blue lines)

For the next 30 seconds, as the plane accelerated and began climbing back into the air, the two pilots intermittently made opposing inputs on the controls.

At one point the pilot was in sole control, before the co-pilot took back over.

The communication button and autopilot disconnect button were also pushed in error during this time, causing alarms to sound.

The pilot then radioed air traffic control to say there had been a problem with the control and the plane was coming around for a second landing.

This time the landing was carried out without incident.

However, they add that analysis is ongoing to double-check that conclusion.

Radar showed the plane deviated to the left, according to the air traffic controller who then clears an alternative runway for the flight at the request of the pilot.

Air France confirmed the incident in a statement issued at the time, and described the malfunction as ‘a technical incident’.

It said: ‘Air France confirms that the crew of flight AF011 from New York JFK to Paris-CDG aborted their landing sequence and performed a go-around due to a technical incident during the approach.

‘The crew mastered the situation and landed the aircraft normally after a second approach.

‘Air France understands and regrets the discomfort felt by customers.

‘The go-around is defined by the authorities, aircraft manufacturers and Air France as a normal procedure.

‘The crews are trained and regularly instructed in these procedures, which are used by all airlines to guarantee the safety of flights and passengers, which is an absolute necessity for Air France.’

The flight landed safely at 10.30am in Paris.