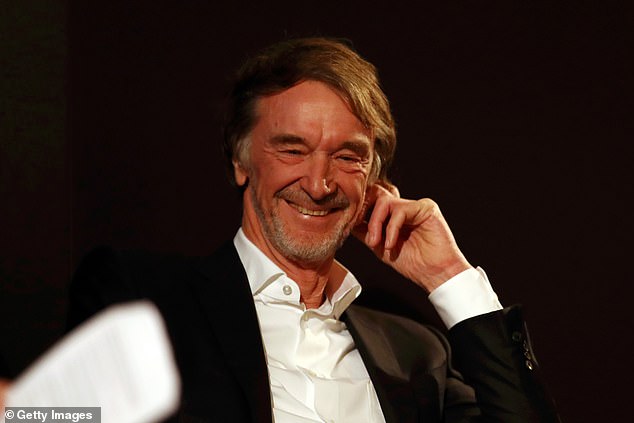 Sir Jim Ratcliffe has made a last-minute, £4billion offer to buy Chelsea with the British billionaire taking on the three other consortiums vying for ownership of the Stamford Bridge club.

The owner of Ineos, the petrochemicals company, said he had held discussions with the Chelsea chairman Bruce Buck on Thursday and decided to make the stunning offer.

‘We put an offer in this morning,’ Ratcliffe told The Times. ‘We are the only British bid. Our motives are simply to try and create a very fine club in London.

‘We have no profit motive because we make our money in other ways.’

The British billionaire submitted his offer to Raine Group, the merchant bank conducting the sale process, on Friday morning.

And in a seperate development on Friday, the consortium led by Boston Celtics co-owner Stephen Pagliuca were told they would not be the preferred bidder, according to the Telegraph.

Ratcliffe said his offer would include an investment of £1.75bn over 10 years to develop Stamford Bridge and other club infrastructure as well as sustaining the team at a high level.

This is on top of the £2.5bn valuation of the club the prospective new owners have to meet. His personal net worth is estimated at £12bn.

He has a season ticket at Chelsea despite being a Manchester United supporter. Ineos already own the Ligue 1 club Nice.

Ratcliffe, who has already discussed the deal with the government, said Ineos would be able to close the deal this weekend if necessary.

The west London club was put up for sale when Russian owner Roman Abramovich was sanctioned by the UK government in March following Russia’s invasion of Ukraine.

A statement said: ‘Sir Jim Ratcliffe, Chairman of INEOS, has made a formal bid for Chelsea FC, for £4.25bn. £2.5bn is committed to the Charitable Trust to support victims of the war, with £1.75bn committed to investment directly into the club over the next 10 years.

‘This is a British bid, for a British club. We believe that a club is bigger than its owners who are temporary custodians of a great tradition. With responsibility to the fans and the community.

‘That is why we are committing to spending £1.75bn over 10 years that will be for the direct benefit of the club.

‘We will invest in Stamford Bridge to make it a world-class stadium, befitting of Chelsea FC. This will be organic and on-going so that we will not move away from the home of Chelsea and risk losing the support of loyal fans.

‘We will continue to invest in the team to ensure we have a first class squad of the world’s greatest players, coaches and support staff, in the men’s and women’s games.

‘And we hope to continue to invest in the academy to provide opportunity for talented youngsters to develop into first class players.

‘We believe that London should have a club that reflects the stature of the city. One that is held in the same regard as Real Madrid, Barcelona or Bayern Munich. We intend Chelsea to be that club.

‘We are making this investment as fans of the beautiful game – not as a means to turn a profit. We do that with our core businesses.

‘The club is rooted in its community and its fans. And it is our intention to invest in Chelsea FC for that reason.’

The Chelsea Supporters Trust said it had not yet heard from Ratcliffe about the bid and said they ‘would welcome dialogue at the earliest opportunity.’

Sky News reported on Thursday that Abramovich demanded an additional £500million for the club, taking the total price to £2.5bn, of which £1bn will be donated to charities.

As detailed by Sportsmail on Tuesday, the three remaining bidders for Chelsea have begun their final pitches, with the preferred bidder initially expected to be chosen this week – before Abramovich’s latest demands.

Still in the running to replace them are a consortium led by Sir Martin Broughton, the former Liverpool chairman, and another headed by LA Dodgers part-owner Todd Boehly.

Ineos and Ratcliffe already own the French Ligue 1 club Nice, whom they bought in 2019

The offer being prepared by Broughton, the former chairman of Liverpool and British Airways, has received investment from sports stars Lewis Hamilton – who is an Arsenal fan – and Serena Williams.

Broughton would become chairman of Chelsea if his bid is successful, but the bulk of the funding is being provided by the owners of the Philadelphia 76ers basketball team, Josh Harris and David Blitzer, who would have to sell their shares in Crystal Palace should they buy another club.

Pagliuca, the owner of NBA team Boston Celtics, had partnered up with Tanenbaum and committed to ‘lifetime ownership’ of Chelsea if their joint bid to buy the club was successful.

It takes the number of suitors back to three after a consortium led by the Ricketts family, owners of the Chicago Cubs baseball team, withdrew from the race.