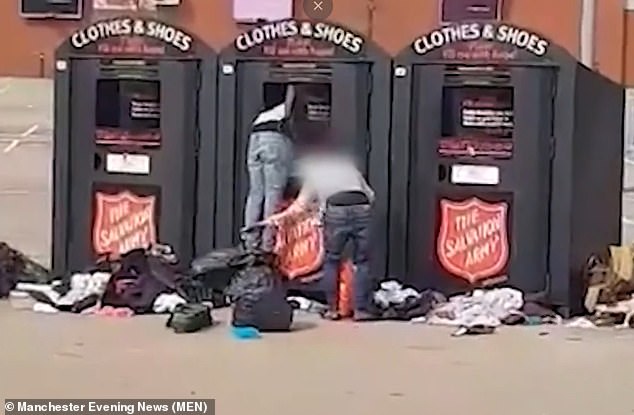 The Salvation Army told the Manchester Evening News that it was ‘saddened’ after a short video clip was posted on social media that appeared to show the individuals diving into the charity bins to take the second-hand items.

In the video, believed to have been filmed on Sunday in Gorton, in South East Manchester, one person is seen opening the swing door of a metal charity bin before leaning deep inside to rifle through and take donations.

A woman looks on, rummaging through black bags of donations that surround the three green bins.

The Salvation Army Trading Company, which sells donated clothes and shoes in charity shops or sends them overseas, said it was ‘saddened’ by the incident

A spokesperson for the trading arm of the charity, The Salvation Army Trading Company, said: ‘We are very saddened that this video appears to show clothes that were kindly donated to our clothing bank being stolen.

‘We urge anyone who finds themselves in such a desperate situation to seek help from their local Salvation Army.’

The charity added that ‘protecting our clothing banks is a priority’ and said it believed the incident was ‘an isolated case’.

The spokesperson said: ‘Money raised from donations to our clothing banks will go towards helping vulnerable people, providing essentials like hot meals for rough sleepers and food parcels for struggling families.

The charity, which was founded in the 1860s by William Booth, has 8,000 of the charity donation bins across the UK

‘This clothing bank in Gorton, like all our sites across the country, is regularly emptied and we encourage members of the public to please only donate to clothing banks which have room and not leave items outside.’

The Salvation Army says that more than £76million has been raised by its trading arm in the last decade thanks to donations of unwanted clothes, shoes and household items.

The charity, which was founded in the 1860s by William Booth, has 8,000 of the charity donation bins across the UK.

Booth was an English Methodist preacher who, along with his wife Catherine, founded the Salvation Army and became its ‘General’.

The Christian movement has spread from London to many other parts of the world and is known for being one of the largest distributors of humanitarian aid.