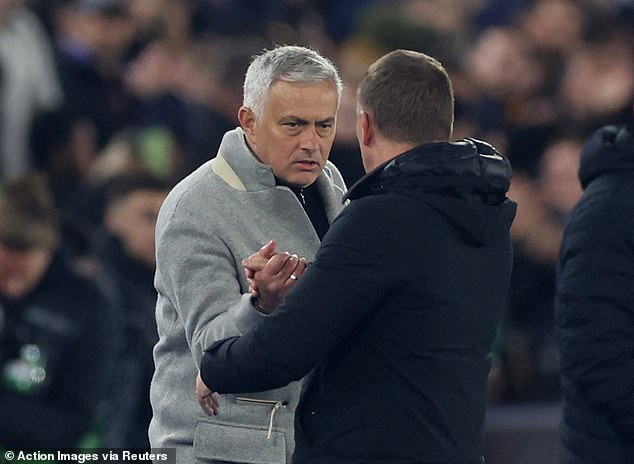 ‘He is crying because it is REALLY expensive!’: Jose Mourinho is left delighted as old colleague Brendan Rodgers gifts him his ‘favourite’ Portuguese wine following Roma’s Conference League draw with Leicester

Jose Mourinho has revealed that Brendan Rodgers gifted him his favourite Portuguese wine after Roma held Leicester to a 1-1 draw in their Europa Conference League semi-final first leg on Thursday.

The duo have a long-standing relationship as Rodgers worked at Chelsea’s academy during Mourinho’s first spell at Stamford Bridge.

It appears there is still plenty of respect between the pair, with Mourinho telling reporters in his post-match press conference about Rodgers’ thoughtful gesture.

Jose Mourinho and Brendan Rodgers previously worked together at Chelsea

They faced one another on Thursday, and seemed to be on friendly terms throughout the game

‘He brought me the best bottle of Portuguese wine,’ Mourinho said.

‘He is crying because it is really expensive! But he wanted to give me my favourite bottle of Portuguese wine, and it’s very difficult to find.

With the tie delicately poised heading into next week’s return fixture, Mourinho was asked whether he would drink the wine now or save it for a special occasion, such as winning the competition.

He responded: ‘I think I’m going to drink next week, it doesn’t matter what [the result is].

‘But I’m happy to see him. I’m happy with the career he’s making, and we share a desire. The winner of the Roma final has to win the Albanian final.’

Rodgers spoke in glowing terms about Mourinho after the game as well, stating: ‘He’s a top manager. Always has been, and always will be.

‘Jose’s teams will always make it difficult for you, but I really enjoyed the game.’

Rodgers was then questioned on whether he had been able to catch up with Mourinho ahead of their high-stakes encounter.

‘Yeah, I spoke to him at length before the game. And he’s got his bottle of wine, so he’ll be happy!’ he replied.

Roma and Leicester will face off again at the Stadio Olimpico on Thursday, with the victor progressing to next month’s final in Tirana, Albania.

Awaiting them in the tournament’s inaugural final will be Feyenoord or Marseille. The Dutch side currently hold a slender 3-2 advantage in that tie after the first leg in Rotterdam.