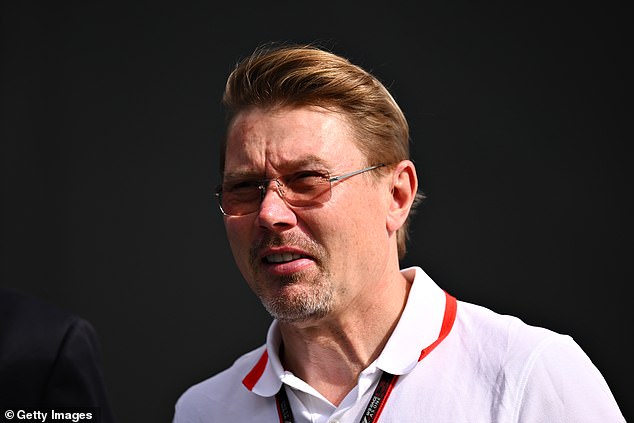 Two-time world champion Mike Hakkinen feels Mercedes already look to be out of the title picture this season.

Lewis Hamilton and George Russell have both struggled to keep pace with Ferrari and Red Bull in the opening four races. Hamilton hit a new low when he finished outside the points in Sunday’s Emilia Romagna Grand Prix, and he was lapped by his rival Max Verstappen in the latter stages of the race.

Russell finds himself 37 points behind championship leader Charles Leclerc, while Hamilton is seventh in the standings, 21 points adrift of his teammate, and Hakkinen has admitted it will be difficult for the Silver Arrows to turn things around.

‘Mercedes clearly has quite complex problems with their car,’ he wrote in his Unibet column.

‘It seems amazing to say it, but the World Championships are already looking out of reach.

‘For the first time in 10 years neither Mercedes made it through to Q3 qualifying [at Imola], which is hard to believe. Clearly the car design is not working in several areas.

‘To see Lewis Hamilton being lapped by Max Verstappen after 41 laps shows what a difficult time he and the team are having.’

There are still 18 races remaining this season, and cars can be rapidly developed during the course of a campaign, offering some hope that Hamilton and Russell could get back into contention at some stage.

Hakinnen is concerned that Mercedes are being left behind, though, and may not have the necessary time to become competitive again.

He continued: ‘They understand the key problems, but time is running out to find solutions.

‘This is the problem in F1 – the World Championship does not wait for you, the races keep coming and there is so little time to sort major problems out.’