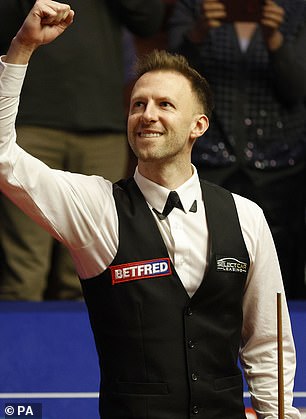 By Peter Carline for The Mail on Sunday

Judd Trump is looking forward to an epic final against hero Ronnie O’Sullivan after the snooker superstars set up a dream conclusion to this year’s World Championship.

After Trump saw off a Herculean fightback from three-time world champion Mark Williams to win a Crucible thriller in the deciding frame, the Bristolian said: ‘It’s going to be an epic final. It’s a brilliant final for snooker.’

And O’Sullivan, who powered past John Higgins with a 17-11 victory, can level the great Stephen Hendry with a seventh title now just 18 frames away.

Roared on by a partisan crowd, Williams took his century tally for the tournament to 16 – matching Stephen Hendry’s record of 20 years ago – with a superb 138.

But Trump – aided by two cross-doubles in the deciding frame – clawed his way back to win a thrilling semi-final. The 32-year-old admitted fortune favoured him.

‘I was praying he was going to make some mistakes and I had all my luck in the last frame. For two of them (cross doubles) to go your way you know it is your day.’

And Trump, 32, who spoke of having an extended break from snooker before the Sheffield spectacular, said: ‘This is probably the most relaxed I’ve been in five or six years. I just feel relaxed in myself and feel like my game is picking up.’

When reflecting on his remarkable performance, Williams said: ‘I put loads of pressure on him and had him on the ropes.

‘I hit him with everything. And just came up a little bit short.’

In the other semi-final, O’Sullivan needed just two frames to beat John Higgins in yesterday’s evening session after a compelling and gritty morning between the other two members of the Class of 92.

It was punctuated by a frustrated thump of the cue by Higgins at a missed red, with squandered chances costing the Scot, who trailed 15-9 heading into last night’s evening session.

And O’Sullivan needed less than an hour and 20 minutes to wrap up the two frames needed to put himself into an eighth final.

And snooker fans are in for a treat. O’Sullivan has won their only Crucible encounter, a semi-final in 2013 on his way to winning the fifth of his six world titles.