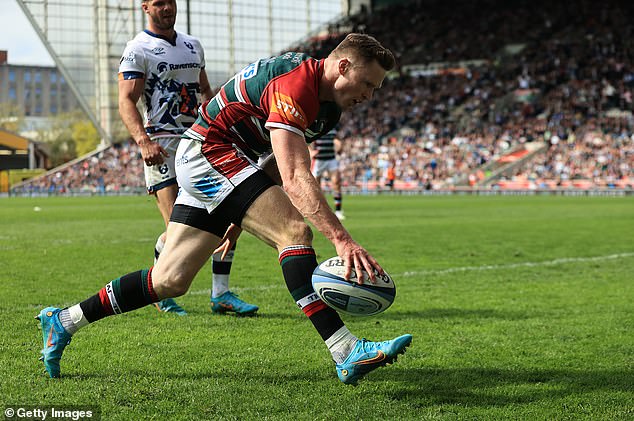 Leicester 56-26 Bristol: Chris Ashton becomes the Premiership’s record try scorer as he helps the Tigers secure victory over the Bears

By David Kent For The Mail On Sunday

Chris Ashton became the Premiership’s record try scorer as Leicester claimed a home semi-final and teed up next weekend’s European quarter-final against Leinster.

Ashton, 35, has had a new lease of life since joining the Tigers in February after a split with Worcester.

Level with former Leicester and Wasps man Tom Varndell on 92, Ashton obliterated that mark before the break with a 24-minute hat-trick.

He then admitted he feared his career was over before Tigers head coach Steve Borthwick got in touch.

‘I had three months at home thinking that was it, so I am very grateful to get the opportunity again,’ Ashton said. ‘I don’t lack motivation here. I am happy to be out there scoring and out there back in front of a crowd. I will chase anything.’

Ex-captain Tom Youngs, who retired in the week to look after his sick wife, led the team out

Former captain Tom Youngs, who retired in the week to look after his sick wife Tiffany, led the team out after a pre-match team talk.

By the time he reappeared to do a lap of honour at the break, the game was as good as over with the league leaders 27-12 up.

Leicester then scored four more tries in the second half to make it eight in all in a stroll.

‘They are the gold standard at the moment,’ Bristol director of rugby Pat Lam said. ‘This is their time.’