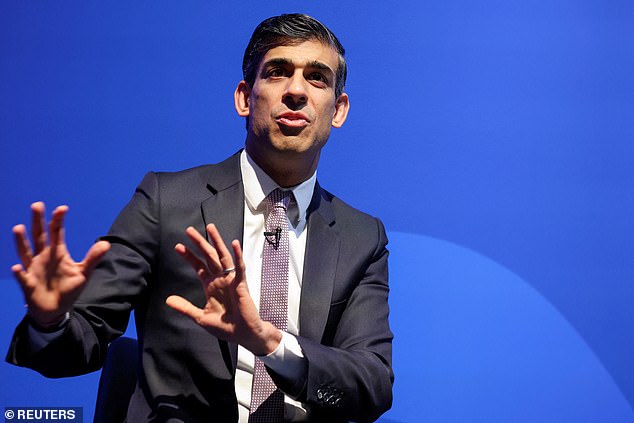 Millions of households across the country are waiting to receive their £150 council tax rebate, that was due to be distributed from this month.

In February, chancellor Rishi Sunak announced the support payment for eligible households in council tax bands A to D.

This is around 20 million households.

It is being distributed to help with the cost of living crisis — but some families could be left waiting until September for their cash to come through.

In South Derbyshire, 39,000 people were told that they wouldn’t receive the money until at least June due to software problems, in a letter seen by MoneySavingExpert.com.

A spokesperson for the district council said that it is working with payment firm Capita on the issue.

‘The earliest that they [Capita] can provide the software that will allow us to distribute the £150 rebate is late April,’ the spokesperson said.

‘This software will require thorough testing before it can be used. If all goes well with the testing, residents can expect to receive their £150 rebate in late May or early June.’

Each council in England is responsible for choosing how it runs its claims processes, including which software supplier it uses.

This means the timing of payments will vary across the country. Those likely to receive their payments first will have a direct debit already set up, because their bank details are on the council’s system.

Those who do not pay by direct debit could wait longer for their money as councils will need to contact them separately to arrange a different way to pay.

Councils have been told not to give out the money until households have paid their council tax this month so they can verify their bank details.

And in Scotland, some councils may choose to take £150 off council tax bills, instead of giving the payment out.

In Manchester, the city council was due to make payments from April 18, it told the money-saving website.

Bassetlaw District Council in Nottinghamshire said payments may not arrive until September.

Earlier this month, Chris Ward, director of finance and resources at Portsmouth City Council, said they were working hard to get the system up and running but added: ‘The software for the rebates isn’t provided by the government so each council has to decide how to administer the scheme and what software to use.

‘A software upgrade has been developed by our provider and we’re testing it.’

The rebate is part of a £9.1 billion government support package announced in February.

Councils that have not started processing the £150 payment

Councils have been told by the government that payments should be made by September 30 — but many families had hoped it would come earlier.

At least 15 local authorities have not processed the cash payments yet, The Mirror reported.

Martyn James, from consumer rights website Resolver, told eligible households to check their council website if in doubt – and not to worry if the site has yet to be updated.

‘You can contact your council for help and support with financial difficulties if you are worried about paying the tax,’ he told The Express.

Households are being warned against a cold-calling scam where people are being asked for their bank details on the phone.

Councillor Mohan Iyengar, vice-chair of the LGA’s Safer and Stronger Communities Board said that many of the scams look legitimate on first impression.

‘Criminals are becoming increasingly sophisticated in their attempts to take advantage of the financial worries people are facing,’ he said.

‘Anyone can fall victim to a scam, and we urge people of all ages to brush up on the tell-tale signs, and the support available to those who need it.’

People can report any energy rebate scams by forwarding the message to 7726, and flagging it with Action Fraud.

At the start of April, the energy price cap rose by 54 per cent, with the average bills now nearly £2,000.